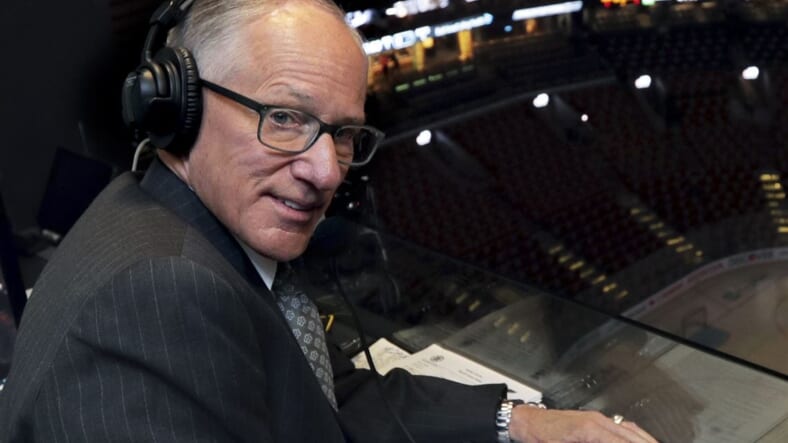 Mike “Doc” Emrick is leaving the broadcast booth after a play-by-play career that dates back to 1973, Emrick and NBC Sports announced in a shared statement Monday. In addition to his many duties calling NHL teams for a variety of teams and networks, EmrickÂ called more than 100 New York Rangers games on WNBC/WFAN Radio from 1983-88.

Happy trails and retirement to the legendary Mike ‘Doc’ Emrick.

Congratulations on a magnificent broadcasting career and many thanks for your dedication to the game.#TSNHockey pic.twitter.com/XPzCXtaCb9

Emrick also served as the New Jersey Devils first voice, arriving for the 1982â€“83 NHL season, and stayed there until 1986. In 1993, he returned to the Devils to replace Gary Thorne and continued to be the Devils’ voice until July 2011.Â  He announced the Devils’ 1995 Stanley Cup victory alongside color commentator and current Ranger’s president John Davidson for the national United States broadcast on Fox.

“I hope I can handle retirement OK, especially since I’ve never done it before,” Emrick told the New York Post. “But I’ve just been extremely lucky for 50 years. And NBC has been so good to me, especially since the pandemic when I was allowed to work from home in a studio NBC created.

“Now, into my golden years, this just seemed to be the time that was right.”

Emrick joined NBC Sports on a full-time basis in 2011, after serving as the television voice of the New Jersey Devils for the previous 18 seasons (21 overall), and is the lead play-by-play voice for NBC Sportsâ€™ NHL coverage. Emrick joined NBC Sportsâ€™ NHL coverage in the 2005-06 season, is currently in his 47th year covering professional hockey, including nearly 40 in the NHL, and has called more than 3,750 hockey games in his broadcast career.

Emrick has called some of the most important and most-watched games in the modern era of hockey, including:

On December 12, 2011, Emrick was one of five individuals, and the first-ever broadcaster, inducted into the United States Hockey Hall of Fame. Emrick has also won a record eight Emmy Awards for â€œOutstanding Sports Personality, Play-by-Play,â€ including an unprecedented seven consecutive Emmys in the category from 2014-2020 and seven New York region Emmy Awards for â€œon-camera achievement.