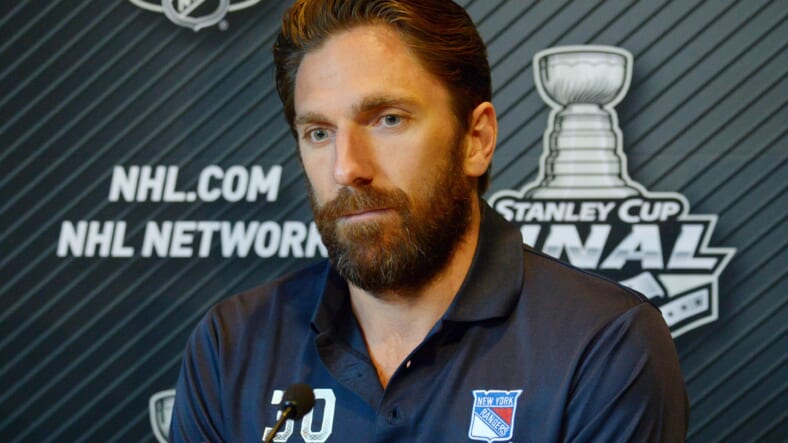 Former New York Rangers goalie Henrik Lundqvist has said little since the announcement of the team’s buyout of the final year of his contract last week.

On Sunday night Henrik Tweeted out a 16-word statement that indicates the direction he may be leaning towards regarding his playing future.

Lundqvist has the advantage now in finding a team that may be in need of his services. Â With the buyout now complete and official Henrik is an unrestricted free agent meaning he can sign with any team that is willing to add him to their roster.

The 15-year veteran with 459 NHL wins would be able to add stability at the goalie position on many teams. Goaltenders are at a large abundance currently, but few have had the success as Lundqvist had with the Rangers. His buyout entitled him to get paid $5.5 million for the upcoming season and $1.5 million for the following season from the Blueshirts.

The NHL rumor mill has been in overdrive ever since the Rangers officially announced the buyout of Hank’s contract. Though nothing official has been announced Henrik has been rumored to be headed towards the Vegas Golden Knights, the Philadelphia Flyers, Vancouver Canucks, or the Washington Capitals.

Of course, rumors are really just something to talk about and write about until something substantial is actually announced by the player or a team.

For now, the only indication that Henrik actually wants to continue to lay is the Tweet he made on Sunday night,. Â It appears Henrik still has the fire in his belly to make one more run at a Stanley Cup.

As it was said in the movie The Godfather,

I wish to congratulate you on your new business, and I know youâ€™ll do very well; and good luck to you â€” as bestâ€™s as your interests donâ€™t conflict with mine. Thank you.”

Rangers fans wish Hank success and would hope to see him hoist a Stanley Cup as long as hi opportunity doesn’t interfere with the Blueshirts chance to win a Stanley Cup Championship as well.