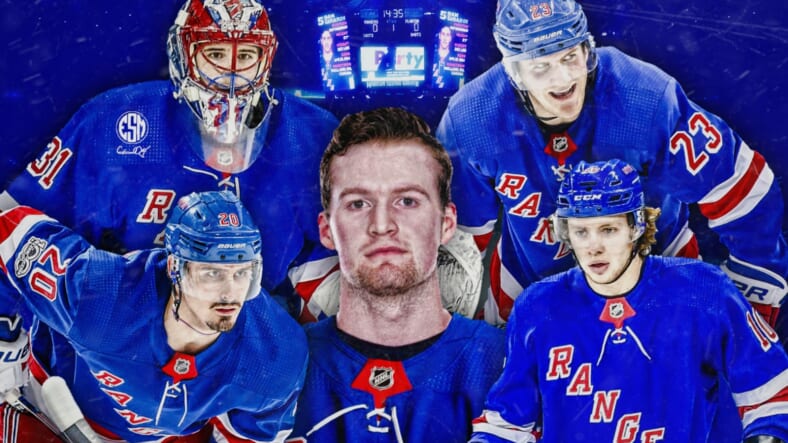 The New York RangersÂ are entering their 95th campaign in the National Hockey League. This season has been delayed due to the Covid pandemic, but the hard work during the offseason has kept the organization focused since last season concluded in the Toronto Bubble.

The club has been preparing for a marathon 56 game schedule, which begins on Jan. 14 against the New York Islanders at Madison Square Garden and concludes on May 8 in Boston against the Bruins.

Empire Sports Media writers Jim Bay and Frank Curto take a look at what has transpired since the Blueshirts were eliminated from the playoffs last summer in the qualifying round against the Carolina Hurricanes.

Team President John Davison, along with general manager Jeff Gorton is set to bring the youngest team in the NHL back to the playoffs in an attempt to win the Stanley Cup for the first time since 1994. Plenty of obstacles stand in their way, yet the team is set up for success as they play in the toughest division in the NHL this season.

Players come and go, but the one constant is the name on the front of the sweater. Here is a look at the upcoming season’s preview, oh baby, this is going to be a lot of fun.

The Rangers traded veteran defenseman Marc Staal to Detroit on Sept. 26, 2020, and the forward Jesper Fast signed as a free agent with the Carolina Hurricanes. The toughest transaction was the buyout of 15-year veteran Henrik Lundqvist.

The Rangers selected the first overall selection in this year’s NHL Draft, Alexis Lafreniere. Gorton and Quinn have high expectations for the success of rookie defenseman K’Andre Miller as he looks to make the team out of training camp. Brendan Smith could be on the bubble with so many new faces on defense.

Goaltender Keith Kinkaid was originally brought in to help ease the team’s expansion draft requirement, but now could be a valuable asset in the Covid pandemic abbreviated season.

The first line will be led by Zibanejad, who was a goal-scoring machine last year with 41 goals in 57 games, a ridiculous 59-goal pace over a full season, with 15 of those coming on the power play. Zibanejad made some nice improvements in creating more chances at both even strength and on the power play, with the hope that the 15 percent and 26 percent rates continue into this season.

Kreider and Buchnevich will again flank Zibanejad on either side, and both have â€œanalyticallyâ€ graded out as productive top-six players for the team. The chemistry that the trio achieved was a huge reason why the Rangers improved so much in the second half of the season.

The second line will be anchored by Panarin, who will have Strome returning, will see Kakko added as his linemate to start the season.

What Panarin has brought to the Rangers is not only on-ice results but also how much of a positive influence he has on his linemates and teammates. This will hopefully hold true for Kakko, who showed signs of improvement upon returning to play in the summer after the league was paused due to the pandemic.

The bottom six is where the Rangers struggled last season. Help will come in the form of the first overall pick in the draft, Alexis Lafreniere.

It is tough to see how quickly Lafreniere will adapt to the NHL game with a small camp and no preseason games to evaluate his skills. However, many projection models have him getting 57 points this year. That may seem high for a first-year player, but with the skills that he brings to the team, this seems achievable.

Much of this may depend on his linemates. Chytil has been projected for improvement this year after being a negative goal contributor last season to an expected positive one this year. Gauthier presents some grittiness and size that could complement his linemates.

Howden will hopefully solidify the third line and has had a nice camp. During Zibanejadâ€™s absence at the beginning of camp, Howden stepped in on the first line and did quite well. He also impressed those with his play during last summerâ€™s playoffs. Lemieux provides the grit for this line, and hopefully, not too much-unwanted attention from the referees. Last season, Di Giuseppe provided the solid and steady play that you want to see from a bottom-six contributor.

The defense will look to improve this season. Jacob Trouba will enter his second season on Broadway and needs to be better than he was last season. By his own acknowledgment, he was not happy with how things progressed, though he seemed more comfortable as the season concluded.

The dynamic duo of Adam Fox and Ryan Lindgren was the highlight of the defense corp. The two rookies became stronger once they were paired together by former defensive coach Lindsy Ruff. With a year under their belt, the two could be the team’s top pair and see plenty of ice time once again.

The club has plenty of new faces on the back end, with rookie K’Andre Miller leading the way. Miller has been praised by the head coach in training camp earning a roster spot on opening night.

Jack Johnson along with Anthony DeAngelo and Brendan Smith will be pushing each other early on to be in the lineup every night.

Igor Shesterkin will take the reigns as the team’s number one goaltender this season. With such a condensed schedule, Alexandar Georgiev should expect more playing time and responsibility with the teams playing a marathon like a schedule.

The taxi squad will be a big piece of the puzzle for the Blueshirts. With the AHL delaying the start of their season until Feb. 5, the Rangers are eligible to carry a minimum of 4 to a maximum of six players. These players can practice and travel with the team but are not on the active roster until they are recalled.

Predictions for the MassMutual North Division

The unusual 56 game schedule will see the Rangers face only the other members of the temporary Eastern Division and will not have any preseason games for their young players, such as first overall pick Alexis Lafreniere, to gel with their new teammates outside of the two-week training camp period.

One of the â€œbenefitsâ€ of this schedule is that the Rangers will also get eight contests with some of the rivals, including the Islanders, Devis, and Flyers.

In this compact schedule, there are some important times that stand out over the slightly condensed schedule this season that commences for the Rangers on January 14.

Like in a horse race, it is important to get out of the gate well, and this will also be the case for the Blueshirts this season. Easier said than done, especially as they face the Islanders in their first two games to start the season. The opening stretch will also see the Blueshirts face the Devils, as well as four meetings split between the Pittsburgh Penguins and Buffalo Sabres.

February will be a challenging month as, on the 10th, the Rangers start a stretch of games with two against Boston before a two-game battle with the Flyers. They then head to Washington to play the Capitals twice, play the Flyers once more, capping things off with two more meetings with the Bruins. This stretch should show whether the Rangers are a true playoff contender or not.

After facing three games against Sabres and Devils, March will again see the Rangers run through a gauntlet of Boston, Philadelphia, and Washington for most of the month. If they are going to survive this stretch, they must reverse the fortunes of 2019-20 that saw the Rangers go a combined 0-5-1 against the Bruins and Flyers.

The Rangers will need their top players to play as they did last season. The pressure will be heavy once again on Mika Zibanejad and Artemi Panarin to have consecutive great seasons shield the Blueshirts look to replicate last season’s playoff run.

Igor Shesterkin takes over for Henrik Lundqvist, huge skates to fill but something Shesterkin is capable of doing.

The wild card is the head coach himself. Dave Quinn and his coaching staff will walk a fine line between coaching the veterans, along with bringing the younger players through one of the most demanding schedules since the early 1970s.

There are no easy games this season, no time to take a night off. Â A team that has a rich tradition along with high expectations from its fan base will need to find the right chemistry out of the gate in order to keep up with the teams within this division.

This season will be like no other. A schedule that has the Rangers playing each division opponent eight times, Covid protocols that will have games postponed and re-scheduling at almost a daily pace, and playing most games in front of little or no fans at all.

2020-2021 season will be the hardest battle of endurance and stamina the Rangers have ever encountered. The reward will be more precious should the team exceed their expectations.

It all begins Thursday night at the world’s most famous arena when the Rangers host the biggest rivals in the NHL.

We have some great writers at ESM, So Jim Bay and I asked what they predict will transpire in the upcoming season.

Brandon Schnapp
Most Goals: Panarin
Most Points: Zibanejad
MVP: Panarin
Best Defenseman: Fox
Rookie of the Year: Lafreniere
The team will miss the playoffs (Brandon is an Islanders fan, BTW)

Frank Curto
Most Goals: Panarin
Most Points: Zibanejad
MVP: Panarin
Best Defenseman: Fox
Rookie of the Year: Shesterkin
Playoffs: Yes, will be eliminated in the second round