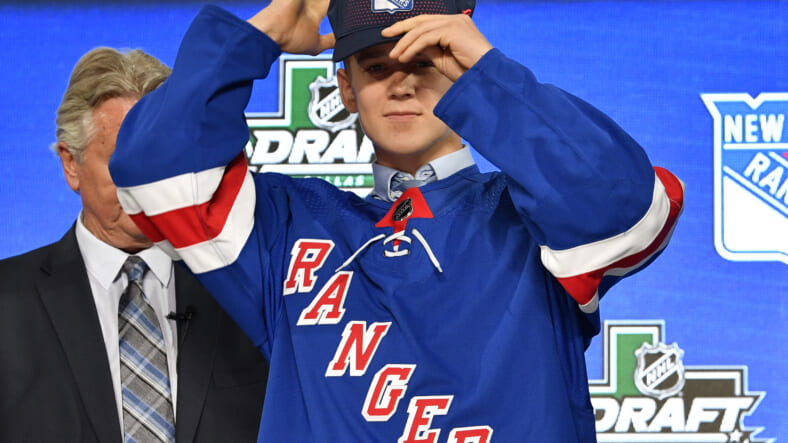 Jun 22, 2018; Dallas, TX, USA; Nils Lundkvist puts on a team cap after being selected as the number twenty-eight overall pick to the New York Rangers in the first round of the 2018 NHL Draft at American Airlines Center. Mandatory Credit: Jerome Miron-USA TODAY Sports

The New York Rangers begin training camp on Wednesday, and all eyes will be on defenseman Nils Lundkvist. Is a roster spot his to lose?

The day has finally arrived. New York Rangers hockey has returned with players reporting to training camp for physicals on Wednesday.

With a few roster spots available, the competition to make the lineup on opening night is sure to be intense. On the blue line, the club is looking for a third-pair combination.

It appears that Lundkvist has secured a place on the roster, and it’s his to lose once practice begins on Thursday.

Lundkvist was the Rangers’ first-round pick (28th overall) in the 2018 NHL Entry Draft.

General Manager and President Chris Drury gleamed with confidence when he spoke of Lundkvist before the development camp began two weeks ago.

“We’re having exhibition games, we’re having a tryout, and it wouldn’t surprise me if at the end of it he’s standing there on our team,” Rangers general manager Chris Drury said to Dan Rosen of NHL.com. “We’re certainly excited.”

The Pitea, Sweden, native played in the Lulea organization in Sweden. He set career highs in goals (14) and points (32) in 2021 as he won the Salming Trophy awarded to the top Sweden-born defenseman in the SHL.

Lundkvist was considering North America last year but decided another year in the SHL would be better for him and his development.

“It’s a big step just coming here and move overseas too,” Lundkvist said this month at Rangers development camp. “With the COVID situation last year, I think it was a good decision to play back home again.”

In A Good Place

Rangers director of player development Jed Ortmeyer likes what he has seen so far of Lundkvist. He sees some comparisons to last years Norris Trophy winner and Rangers teammate Adam Fox,

“He reads the play well. He knows when to jump in offensively. He’s got a heavy shot and an accurate shot. He scored a lot of goals for his team in Sweden from the point. He can generate offense for his team but he can also play against other team’s top lines and shut them down. I think the overall game that Adam Fox has, the way he thinks, there could be some similarities there for sure, but we’ll see when the puck drops.”

The organization has been successful with the last two rookie defensemen to get a full-time spot with the team. Two years ago Adam Fox took center stage, and last season K’Andre Miller shined bright under the Broadway lights.

Can the Rangers score a hat trick with Lundkvist? Sunday’s first preseason game could indicate how things will play out for the young player.