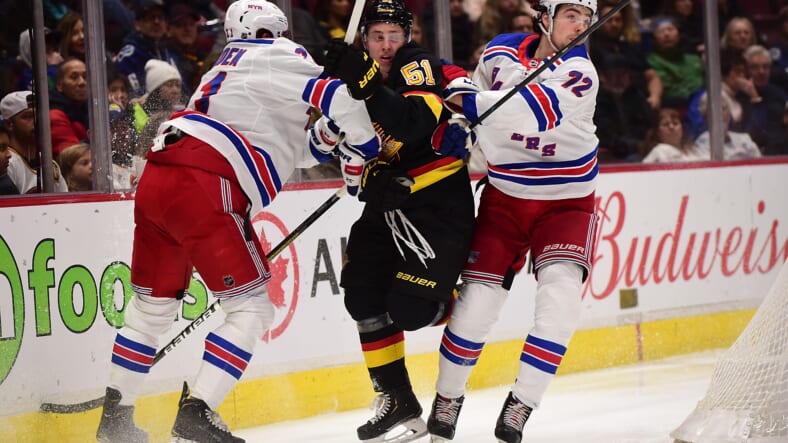 Among the many unknowns for the New York Rangers coming in the 2020-21 season is what their division may look like with COVID-19 still prevalent around North America. This is due to the fact that one of the proposals that the NHL may have to adopt is having an all Canadian division, as border crossings between the US and Canada remained closed.

Travis Yost of TSN was among the first to mention this as a serious possibility last week when he reported on a passing comment from Las Vegas Golden Knights owner Bill Foley.

Foley, addressing a question about the risk of trading defenseman Nate Schmidt to a division rival in Vancouver, suggested to Sportsbook Radio and Vegas Hockey Hotline host Brian Blessing that the risk would be minimized for at least next season because of the all-Canadian division.

Then, Pierre LeBrun wrote in the Athletic that the NHL could ” start the season in geographical hubs but end the season in all 31 markets”, something that could be discussed when the NHL GM’s have their first meeting in quite some time on Friday.

With or without fans?

A bubble worked for the playoffs, but experts doubtful it can work for a 6 month regular NHL season set to begin Jan 1https://t.co/INP0tzItmh

While the Metropolitan does not have Canadian teams in their division, the ripple effect from other divisions would lead to a change for the other U.S.-based teams.

In addition, the NHL would try to set these and schedule games based on geographic location, similar to what MLB did in their current season.

This would seem to be the best option, as he NHL has little interest in losing another $75-90 million every two months with massive three-games-a-day Hub City play like they did to produce the Stanley Cup playoffs in Toronto and Edmonton. The players are likely not in much rush to go back to life in a bubble either.

While of course, nothing is set in stone, here is one proposal of how to align teams based on geographic regions:

These divisions would allow for some type of bubble, whether it be like a mini-bubble for short periods of time, or just play within your division, much like MLB did for their regular season.

There is one thing we should all remember over the next few months as we try and guess what next season might look like: That is whatever form the season starts with, it may not be the same at the end.