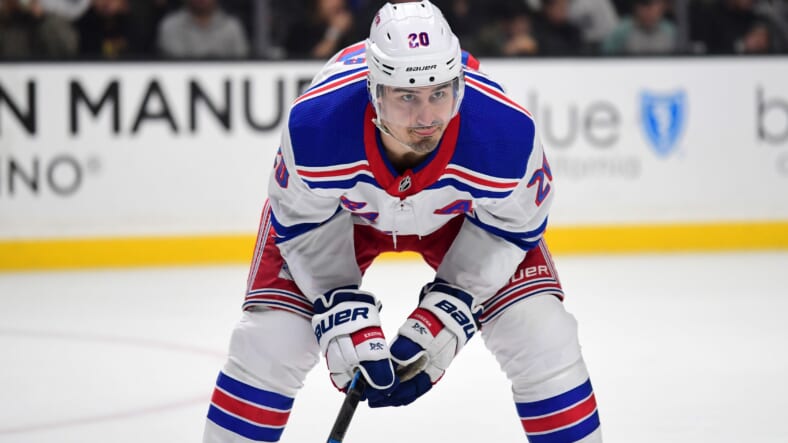 The New York Rangers valiantly rallied from a two-goal deficit but the comeback fell just short as the Blueshirts fell to the Philadelphia Flyers 4-3. The Rangers were playing without some of their top players, missing such key pieces as
Artemi Panarin, Kaapo Kakko, K’Andre Miller, Filip Chytil, and Jacob Trouba. Miller was lost to the team when he was added to the NHL’s COVID-19 protocol list. Earlier on Wednesday, the NHL postponed Thursday’s game between the Sharks and Vegas Golden Knights due to a player entering the COVID-19 protocols. However, the Rangers-Flyers game was allowed to proceed.

â€œWeâ€™d love to have all of our guys healthy and ready to go,â€ Rangers coach David Quinn said. â€œWeâ€™re no different than most teams in the league. We donâ€™t have that luxury right now.â€

Igor Shesterkin made 35 saves for the Blueshirts (6-8-3), which had won three in a row on the road. The Rangers were outshot in this game 39-27.

Chris Kreider was the star of the night by scoring all three goals for the Rangers. It was his third career NHL hat trick and his first since Dec. 31, 2016, at Colorado. Kreider was also the first Ranger who registered a hat trick against the Flyers since Ryan Callahan on Feb. 11, 2012, at Philadelphia.

Two of Kreider’s goals were scored on the power-play. Kreider has now registered two power-play goals in a game for the fourth time in his NHL career and for the first time since Nov. 15, 2018, at the Islanders.

Claude Giroux had three assists in his return from a COVID-19 absence but the Flyers still played without Jakub Voracek, Travis Konecny, Oskar Lindblom, and Scott Laughton because of COVID protocols.

The Rangers return to action on Friday when they host the Boston Bruins. Puck drop is scheduled for 7 P.M.