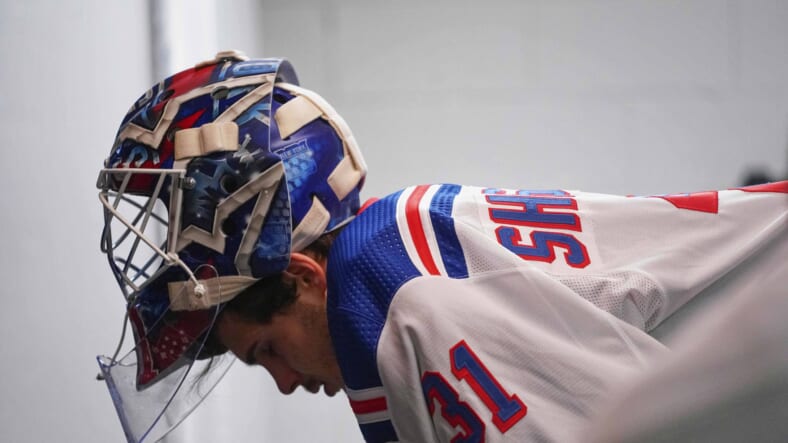 During his latest press conference on the signing of Chris Kreider, New York Rangers president John Davidson announced thatÂ Igor Sheserkin and Pavel Buchnevich had been injured in a car accident. Shesterkin sustained a “small upper-body rib fracture, not displaced” in the accident on Sunday and will be re-evaluated in two weeks.Â  â€œThe estimate right now is that he will be reassessed regarding his injury in a couple of weeks,â€ Davidson said.

â€œIn our business, youâ€™re certainly dealt curveballs all the time. Thatâ€™s a tough curveball we have to deal with.â€ Buchnevich was a passenger, and was quite shaken up according to Davidson and is day-to-day.

Davidson said the accident was in Brooklyn, and the driver in front of them made a U-turn that led to the collision. Both players were wearing seatbelts, and the airbags were deployed. The players were taken to New York-Presbyterian Hospital and seen by Ranger doctors.

The New York Rangers were fortunate to keep three goaltenders

With Shesterkin out for a few weeks, the Rangers gamble of keeping three goalies paid off. Alexandar Georgiev and Henrik Lundqvist will step in to take on the goaltending load. Georgiev has a 14-12-1 record this season with a 2.98 GAA. Lundqvist, who has not seen a lot of action recently, has a 10-13-3 record with a 3.12 GAA. The Rangers will miss Shesterkin’s outstanding play are still in good hands with Georgiev and the veteran Lundqvist.

As Georgiev will probably not be traded by the 3 PM deadline, this puts the spotlight on other players. TSN Insiders have indicated that Jesper Fast will likely be traded before the deadline. Fast was a sixth-round pick by the Rangers in 2010 and made his debut in 2013-14. He has played 413 regular-season games for the Rangers, notching 54 goals and 145 points, while adding 39 playoff games. He scored two goals in Saturday nightâ€™s 3-2 win over the visiting Sharks, including the game-winner. Even though his recent play has been excellent, his cap hit going forward, and the increased trade value of late makes his a viable option to be traded.