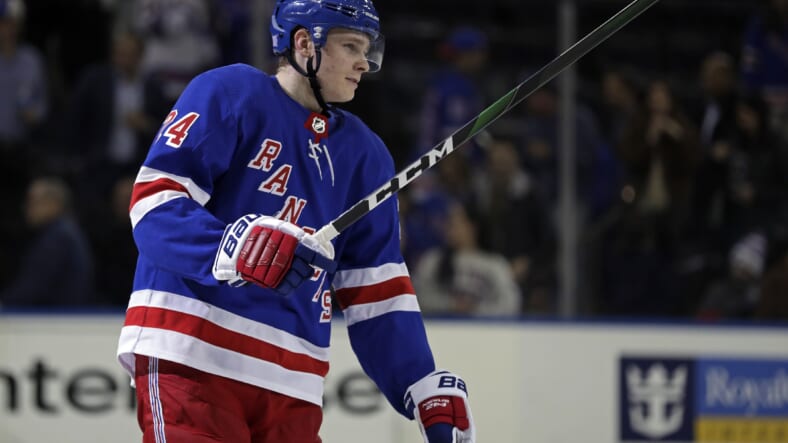 In what has been a reoccurring theme, the New York Rangers lost another close game as they fall to the Boston Bruins by the score of 1-0. This marks the third straight loss for the Blueshirts and they were shutout in two of those losses.

As the two teams were playing back-to-back games, this contest became a bit chippy as a handful of fisticuffs broke out in the second period, highlighted by the Rangers Brendan Lemieux and Bruins forward Trent Frederic dropping the gloves.

One of the more telling stats that demonstrate the futility of the Rangers is their inability to score on the power play, going 0 for 6 in the game. This futility was very evident late in the game when the Rangers picked up a power play with just about a minute left in the game when the Bruins Charlie MacAvoy was sent off for delay of the game. The Rangers then pulled goaltender Igor Shesterkin but could not muster a decent attempt at a shot in spite of having a 2-man advantage for that time.

After the game, Jacob Trouba talked about the frustration of losing so many close games in his post-game Zoom conference. “It’s not good enough to lose games by a goal,” Trouba said. “It’s the NHL, you have gotta win games. You have to find a way to get points, especially in a shortened season. We have got to find a way to win hockey games.”

Head coach David Quinn was asked about the lack of scoring and especially the power-play in his post-game Zoom conference. “We are passing when we should shoot and we shoot when we should pass,” Quinn said. “We just make bad decisions and we are slow. We are not going to go anywhere with the power-play clicking the way it is.”

As the Ranger’s next game on Sunday was postponed due to the Philadelphia Flyers COVID-19 concerns, the Blueshirt’s next scheduled game is on Tuesday night against the New Jersey Devils.