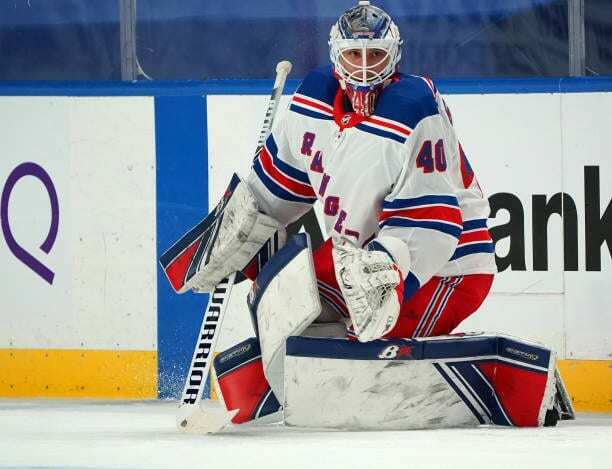 The New York Rangers have completed the first quarter of their season with a 13-4-3 record despite backup goaltender Alexandar Georgiev’s sub-par play.

The New York Rangers have been a surprise in the National Hockey League’s early win in the 2021-2022 campaign.

Igor Shesterkin has had a great start to the season with 11 wins in 16 games this season (11-3-2, 1 SO) and has won a few games the Blueshirts had no right winning. The Rangers have taken advantage of their schedule, but beginning Wednesday’s game against Philadelphia at MSG, eyes will now be focused on backup goalie Alexandar Georgiev to help carry the load.

Georgiev has had another slow start to an NHL season. The 25-year-old began this season as he did last season, allowing soft goals and losing the few games that he has played in. In the six games he has played in he has just won two games (2-1-1). He has a 4.08 GAA along with a .858 save percentage.

So what is the problem with the Ruse, Bulgaria native? Â That is the million-dollar question. Here is a goalie who was splitting time with Henrik Lundqvist a few years ago. He had 14 wins in the 2018-2019 season and recorded 17 wins in 2019-2020.

Last season, his first with Igor Shesterkin as the number one goalie, he only recorded eight wins, Â in 18 starts.

Confidence seems to be Georgiev’s worse enemy. He is standing in quicksand, and he is the only one who can pull himself out. Â Soft goals have become customary in his game. He tends to struggle more once the soft goal is allowed and loses his focus in games.

He show signs of regaining the form that saw him have successful seasons on both 2018 and 2019 seasons. Â He is battling the game on all fronts and now he may be battling to remain the team’s backup goaltender.

Georgiev cannot be sent down to the AHL without clearing waivers, something that would be highly unlikely to occur.

The Blueshirts have a quality goaltender playing for the AHL affiliate Hartford Wolf Pack in Keith Kinkaid. He was up with the team all of last season when the Rangers had a taxi squad due to COVID-19 protocols and performed well when called upon to play.

He started seven games last season and had a 3-2-1 record. The highlight of his game last year was how the team played in front of him. Â Their game consisted of a hard-charging system leading into the opposition’s end.

This was and currently is the opposite of how the team looks the Georgiev in between the pipes. As his confidence has decreased so have his teammates in front of him.

The Rangers could also look outside the organization. A goaltender such as Matt Murray, who was placed on waivers by Ottawa on Saturday and assigned to the AHL on Sunday would fill in nicely with his NHL experience.

He has played seven seasons in the NHL with 127 wins in 232 games played for both Pittsburgh and Ottawa.

The Rangers cannot wait too long in deciding the best direction for the club to take. The favorable schedule that the team has had is now going to be their enemy. Â The schedule will be difficult to navigate around leading to the All-Star/Olympic Break (if the NHL doesn’t decide to opt-out). To add more schedule fuel to the fire, the Rangers currently have 11 sets of back-to-backs remaining on their schedule along with two games that need to be rescheduled (Ottawa and N.Y. Islanders).

Georgiev has to show he belongs with the team now, or he will risk most likely being traded out of New York.

The Rangers start has playoff expectations in high gear. The team needs a quality goaltender to carry the team on the rare off days Shesterkin needs to succeed at a high level.

It’s all up to Georgiev to get his game back on track.

Can the Knicks expect Cam Reddish to be a difference-maker?
wpDiscuz