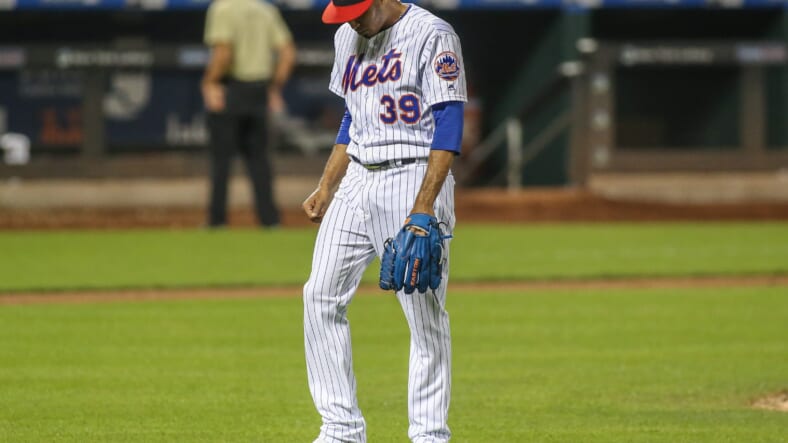 Last nightâ€™s game was crazy from almost every point of view. It featured a New York Metsâ€™ victory against the Philadelphia Phillies, 8-7, and it stayed that way because of an overturned call on a home run that would have tied the game, but the crew eventually ruled as a double after review.

With a four-run lead, the Mets decided to give the ball to their best reliever, who happens to be their closer, Edwin Diaz. It wasnâ€™t a save situation, but manager Luis Rojas went with Diaz anyway.

The strategy did not work out for the Mets, given that Diaz conceded a base on balls and then allowed an RBI triple with one out.

After striking out Odubel Herrera for the second out, Diaz was about to get out of the jam. However, he walked another hitter and then reported back tightness to Metsâ€™ pitching coach Jeremy Hefner, but opted to try and pitch through it.

That was costly, as it was when Rhys Hoskins hit the controversial double that was initially called a home run, thus tying the game. When the crew said it was a double, the game went from 8-8 to 8-7 instead, and Rojas decided it was enough for Diaz and brought Jeurys Familia.

â€œWe were hoping that ball stayed in the yard,â€ outfielder Kevin Pillar said per the Metsâ€™ official site.

â€œWe trust our bullpen,â€ Pillar said. â€œWe had the right guys step up and make some good pitches, and we got out of there with a win.â€

Rojas confirmed that Diaz will undergo testing on Monday. The hope is that the issue is minor and doesnâ€™t require a stint in the injured list.

The victory, seen from that angle â€“ potentially losing the closer for at least a couple of days â€“ was costly. But it was a victory nonetheless.