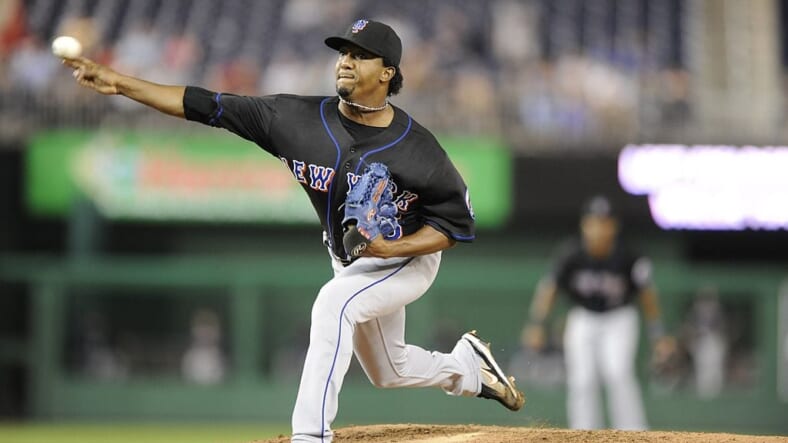 Pedro Martinez came to the New York Mets after many dominant years as a Red Sox. Along with Carlos Beltran, he played a crucial role in transitioning the team from rebuilders to contenders.

Martinez signed a four year/$53 million contract after winning the 2004 World Series with the Red Sox. He never quite lived up to the full expectations of the deal, but his presence on the roster was immeasurable.

When Martinez joined the Mets in 2005, the team was rebuilding around young stars like Jose Reyes and David Wright, while the days of Mike Piazza were coming to a close. 2005 showed the Mets were on the rise, which led them to bring in players like Carlos Delgado, Paul Lo Duca, and Billy Wagner the following season.

Martinez pitched as advertised during his first year with the Mets. He went 15-8 with a 2.82 ERA over 31 starts. He made his seventh All-Star team and led the MLB with a 0.95 WHIP. A couple of memorable moments came when the sprinklers at Shea Stadium randomly turned on during his start against the Diamondbacks. Martinez drank from the sprinklers and embraced the moment with a smile in a way he only could.

He came into the 2006 season with high expectations to repeat his 2005 performance. Martinez pitched even better than he did the previous year during the first two months of the season. He was 5-1 with a 2.50 ERA and 88 strikeouts. Martinez looked like he was still in his prime, even at 34.

Things suddenly changed when he slipped in the clubhouse after being forced to change his undershirt during a May 24 start again the Marlins. From that point on, he only made 11 more starts for the rest of the season and had a 7.11 ERA during that time. A couple of DL stints kept him on the sidelines, and his season ended in September.

Martinez shed tears on the fact that he would not be able to pitch during the postseason. His injures of a torn muscle in his left calf and a torn rotator cuff. Martinez contemplated retirement if things did not get better.

13 years ago today the Mets signed Pedro Martinez to a 4 year, $53 million deal. He made it okay to wear goggles to a champagne shower, and for that players are forever grateful. pic.twitter.com/5FyKLSs184

After a year of recovery, Martinez returned in an attempt to save the collapsing Mets in 2007. Over five starts he had a 2.57 ERA, but it was not enough to get them back into the postseason. It did give the Mets hope that he would pitch well for the final year of his contract in 2008.

It only took four innings for Martinez to tear his hamstring, which kept him out for two months. Upon his return, his ERA was over five, and he never quite pitched well for an extended period. During the second Mets September collapse, he had a 7.77 ERA in four starts.

Martinez’s Mets career ended the complete opposite way it began. Because of that, he does not receive the support he deserved, but he was an integral part of any pitching success the Mets in 2005 and 2006.