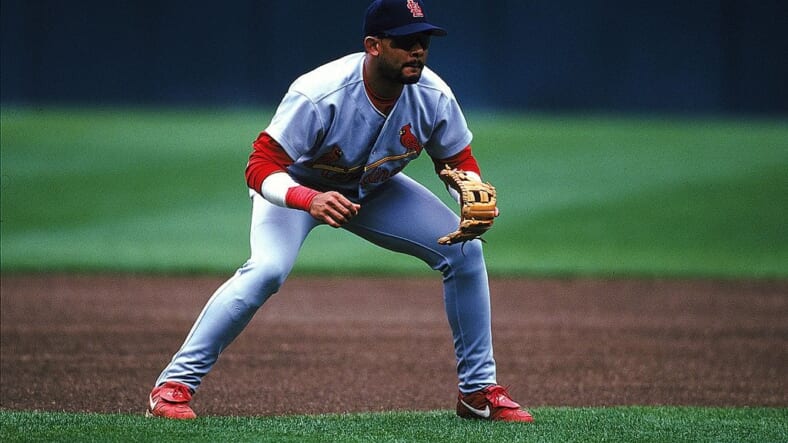 27 Jul 1999: Fernando Tatis #23 of the St. Louis Cardinals is ready for the ball in the infield during the game against the San Francisco Giants at 3Com Park in San Francisco, California. The Giants defeated the Cardinals 2-1.

When baseball fans hear the name Fernando Tatis, they automatically think of the young star, who plays for the Padres. New York Mets fans remember his father played for the Mets at the tail end of his career. The man who once hit two grand slams in the same inning provided the Mets with all the baseball left in his body.

Outside of one 34 home run season, Tatis was an average player during his career stops with the Rangers, Cardinals, and Expos. His career seemed finished four years before he arrived in Queens. Tatis left baseball for two years after the Rays cut him in 2004 spring training.

Journey Back to Baseball

After spending time in his native Dominican Republic, he signed a minor league contract with the Orioles. He came back to help raise money to build a church. Tatis only received 56 at-bats with the Orioles in 2006, where he hit .250 with two homers.

Tatis landed with the Mets on a minor league contract in 2007 after the Dodgers granted him his release. He spent the entire 2007 season in triple-A where he hit .276 with 21 home runs and 67 RBIs. Tatis started 2008 in triple-A but came up in May after Angel Pagan suffered an injury.

He struggled to find consistent playing time until July when the outfield injures piled up. From JulyÂ  7 through the end of his season, he batted .311/.404/.544 with nine home runs and 34 RBIs. His situational stats were even better, .394 w/RISP and .357 in high leverage situations. The Mets were 36-19 during his hot streak.

Regardless of how you feel about baseball, Fernando Tatis — what a story. Are the Mets back? Feels like it. I certainly hope so.

Unfortunately, like 2008 did for the Mets, things came crashing down when Tatis separated his shoulder trying to make a catch in September. Sporting News named Tatis the Comeback Player of the Year after his miraculous season.

Things started slowly in 2010 and never picked back up. He only hit .185 through 41 games and lost time in the outfield. Tatis hung around the Caribbean leagues until 2014 when he would announce his retirement from baseball.

To go along with his baseball comeback, he also reunited with his father as a Met. Then General Manager, Omar Minaya, had Murray Chass of the New York Times write an article on Tatis’ search for his father. Eventually, the two reunited for the first time since he was five.

Now we have Fernando Tatis Jr. to marvel over for the next decade. While he plays differently from his father, he carries the same swing Fernando Sr. displayed during his time in New York.