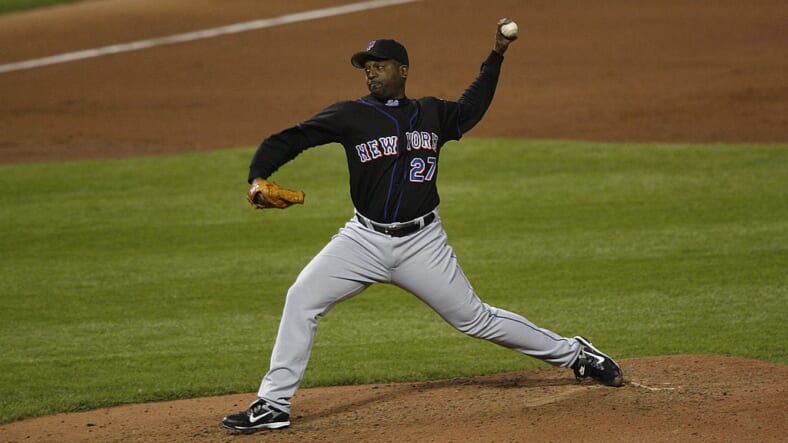 Reliever darren Oliver of the Mets throws a pitch during game 3 of the NLCS between the New York Mets and St. Louis Cardinals at Busch Stadium in St. Louis, Missouri on October 14, 2006. St. Louis won 5-0 to take a 2 games to 1 lead in the series. (Photo by G. N. Lowrance/Getty Images)

The long time veteran Darren Oliver came to the New York Mets in 2006, attempting to revitalize his career. After spending the majority of his career as a starting pitcher, he became a vital member of the Mets bullpen.

In honor of Carlos Beltran becoming the Mets next manager, here’s his 16th-inning walkoff against the Phillies in a Mets 9-8 win on May 23, 2006.

During today’s game, the long reliever is a dying breed, and only a handful remain. Oliver became just that for the Mets. He made the team out of Spring Training as a reliever but had not been a full-time reliever since 1995.

Oliver pitched more than one inning during 24 of his 45 appearances. Outside of Seth Lugo, he has been the last long relief pitcher the Mets had in their bullpen. One of the tough parts about pitching as a long reliever is getting stranded on the mound, whether you are dominating or letting run after run score.

He finished the season with a 3.44 ERA in 81 innings with a 1.12 WHIP. Those numbers include a couple of those rough outings which inflated the ERA. Take away those two outings, and his ERA sits at 2.31 in 74 innings.

Oliver came up clutch in his biggest role of the season during the 2006 NLCS. He threw six shutout innings out of the bullpen to save the pitching staff for the final four games of the series. The outing would turn out the be his last with the Mets. He was in consideration to start game seven over Oliver Perez, but after not starting a game all season, Willie Randolph went with Perez.

It was surprising that the Mets did not bring him back, considering their bullpen struggles the following two seasons. Despite being 35, there was no reason to think his success was sustainable. Oliver pitched seven more seasons with a 2.85 ERA and averaging 59 games per season.