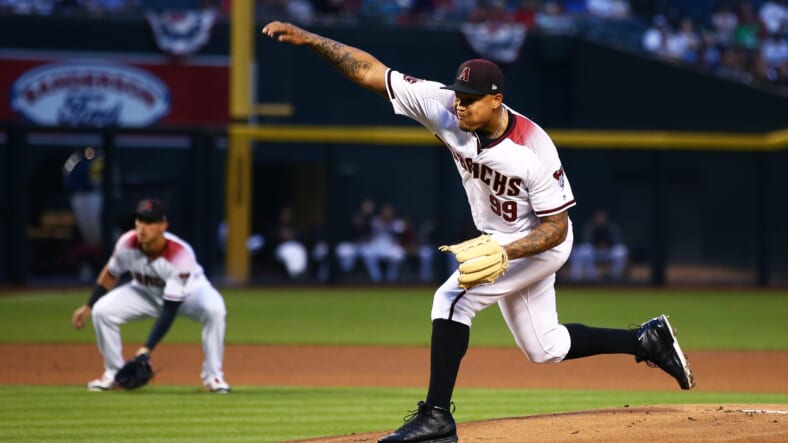 Taijuan Walker, the former top prospect from the Seattle Mariners’ farm system, is now a free agent. The Arizona Diamondbacks, his team for the last three seasons, decided to non-tender him. Could the New York Mets be interested?

In fact, they should be, as there is an obvious match. Walker is talented and young (27 years old), and the fact that the Mets don’t need him to be a frontline starter should ease any unrealistic expectations.

Would he be a fit with the New York Mets?

However, the Mets have more than a job to offer him. In New York, he will play in a competitive environment but without having to carry the load on his shoulders. The team needs him to take the ball every fifth day.

Walker would be perfect for the New York Mets. They are looking for a fifth starter, yes, but the right-hander has a solid floor and considerable upside, even if he is unlikely ever to return ace-like performance at this point. The team should bet on that upside.

His career so far

Throughout his career, Walker has been known for two reasons. One is his undeniable talent as a pitcher, and the other one is, sadly, for being notoriously injury-prone.

Here is a sneak peek of his injury history:

After a very promising 2017 in which he accumulated 2.5 fWAR as a 24-year-old, his career seemed to be about to blast off. Instead, the right forearm inflammation that initial studies showed in 2018 took a turn for the worse when TJ was recommended.

He underwent surgery three starts into his 2018 season, and after several months of rest and rehab, he returned to a major league mound for a scoreless inning on September 29, 2019, against the San Diego Padres.

In his only appearance, he faced four batters and allowed one hit, surrendering no runs and notching a strikeout. His fastball averaged 93.3 mph, according to Fangraphs, almost two mph slower than his 95.2 marks, the highest of his career, in 2014 with the Mariners. Yet, there shouldn’t be any reasons to worry about his velocity, since the number isn’t that far off his 93.9 mph of 2017, his best season.

His most recent successful campaign

Speaking of 2017, it is the latest blueprint of what we can expect from Walker as a starter. Mets fans, take notice!

His fastball is a vital pitch in his arsenal, as he throws it around 55-60 percent of the time. If he can at least approach 94 mph, as he did in 2017 and early 2018, it will be huge for him as his control and command aren’t elite.

His split-finger is his favorite secondary weapon (per Savant), and he has thrown active cutters and curves in the past. He can likely be had in a one-year deal, so it probably won’t cost the New York Mets too much money to give him an opportunity and see if he can regain the feel for his breaking ball and if his fastball velocity can come all the way back. He is worth the shot.