The Legacy of Hinchliffe Stadium, Part I: History on Liberty 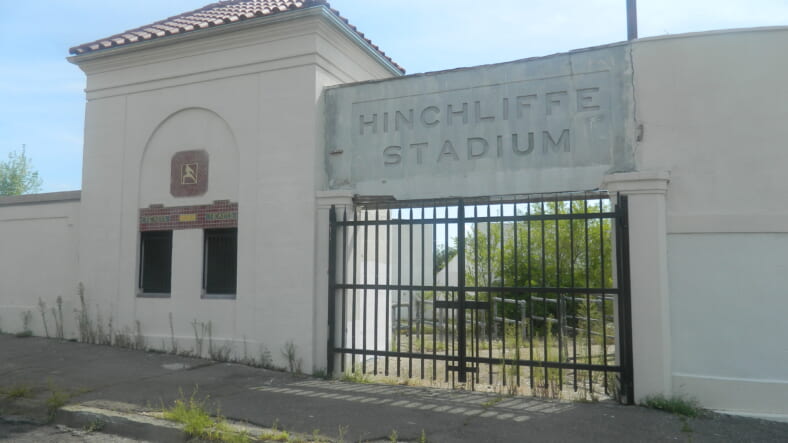 The entrance to Hinchliffe Stadium, as seen in the summer of 2020 (Photo: Geoff Magliocchetti)

In celebration of Black History Month, ESM studies the legacy of Hinchliffe Stadium, a tragically decaying part of our nationâ€™s history in Paterson, NJ.

History lives at the intersection of Liberty and Maple Streets in Paterson, New Jersey. Tragically, those who venture to the area, a stoneâ€™s throw away from the Paterson Great Falls National Historical Park, are often unaware that theyâ€™re walking the same steps, breathing the same air as some of baseballâ€™s bravest legends. The Great Falls sit in the shadow of a baseball cathedral and testament to American resiliency and strength, a multi-purpose facility known as Hinchliffe Stadium.Â

One could hardly be blamed for not recognizing the significance behind Hinchliffe. The stadium resembles a set piece from a post-apocalyptic series like The Walking Dead, its grandstands populated by uncontrolled vegetation and graffiti. What should be the playing surface is a vacant, cracked, concrete lot. Etchings of Negro league teams from an event held several summers prior are perhaps the only evidence that baseball was once played here.

Those who have documented and witnessed the history Hinchliffe has hosted find its deterioration a downright shame. Through a combination of bureaucratic negligence and mishandling, Hinchliffe was fallen into a state of disrepair. Today, itâ€™s one of only two major Negro Leaguesâ€™ ballparks still standing in the country (the other being Rickwood Field in Birmingham). But itâ€™s being treated as anything but the living museum it should be.

â€œHinchliffe is one of a few remaining stadiums that played host to Negro League games,â€ Bob Kendrick, President of the Negro Leagues Baseball Museum in Kansas City said of the stadiumâ€™s importance. â€œFrom that standpoint, it actually makes the stadium and the grounds artifacts. I know people donâ€™t always look at it that way…but itâ€™s an artifact. It can be a living, breathing artifact again. That makes it really important.

â€œThe historical significance that it hosted all the great Negro League games and all the Negro League stars who played there really does makes (reclamation) something that we have a vested interest in wanting to see come to fruition.â€Â

As the country celebrates Black History Month, America is undergoing a period of reckoning and education about the prejudiced, violent, racist parts of its past, which have tragically crept into its present as well. Hinchliffeâ€™s glory days were situated at the height of the turbulence, as the stadium was a haven of sorts in the era of segregation. From its opening, it was defined by the heroes of Nego league baseball lacing up their cleats through â€œbarnstormingâ€ events and more. Local and national names alike patrolled its dirt and grass. Some made their mark in both, namely Larry Doby, a Paterson-raised outfielder that broke the American Leagueâ€™s color barrier in 1947.Â

Through this reckoning, some wrongs are being righted. Last December, Major League Baseball announced that Negro league records and statistics would now be counted in their stat ledgers. But, as recent times have demonstrated, the path to justice and equity has barely been traversed. Look no further than Hinchliffeâ€™s dilapidated state, despite its status in history.Â

But as the country seeks to make amends, Hinchliffe may yet have its moment in the restoration spotlight.Â

The day before MLBâ€™s groundbreaking announcement, New Jersey Governor Phil Murphy announced that Paterson would receive $20 million in additional tax credits to go toward renovation projects, headlined by the efforts at Hinchliffe. A volunteer group, Friends of Hinchliffe Stadium, was founded in 2002 and spreads awareness and education, working alongside local historians. Among their progress when it comes to the restoration has been composing grants and petitions, as well as numerous public speaking appearances. To date, their efforts have earned over $500,000 in grant money toward preservation.Â

â€œOur goal, pretty much from the outset, is this idea of creating awareness and being an advocate for the stadium, basically saying, â€˜Hey Paterson, you have something pretty special here, you might want to take care of it,â€ FOHS co-founder Brian LoPinto said. â€œI think the most important thing is to accept and realize the fact that without the African-American, Negro Leagues components, I donâ€™t think that Hinchliffe Stadium would have the type of national significance that it has. Itâ€™s the only national historic landmark that honors baseball. Itâ€™s the only sporting venue thatâ€™s within the boundaries of a national park.â€Â

LoPinto formed the group in 2002 alongside Dr. Flavia Alaya and they work alongside local and national contributors like Jimmy Richardson and BallparkBrothersâ€™ Gary Aufforth.Â

This is the story of Hinchliffe Stadium and its past, present, and future, told in four parts, as ESM honors those who braved the ultimate evils of history to fulfill the American Dreamâ€¦

Named after the Hinchliffe family, which left a political and economic impact in the city, the establishment opened in the midst of the Great Depression. At its forefront, Hinchliffe will always be first remembered for the baseball history it was able to foster despite the most heinous of limitations. A stadium uncannily resembling both the Polo Grounds in Manhattan and Circus Maximus in ancient Rome, diamond warriors fought an enemy like no other: racism.Â

In an era where basic rights were denied to Black citizens across the country, the national pastime was part of the attempted hijacking as well. But Black baseball had developed a strong following, particularly on the east coast in the decades before Hinchliffe opened its Art Deco gates. The Garden State had briefly played host to the Philadelphia Pythians in Camden shortly after the Civil War. But due to segregation laws, true facilities and organized leagues were hard to come by.Â

Hinchliffe would go on to play host to not just some of the more renowned teams in the Negro Leagues (including the New York Black Yankees) but its barnstorming efforts would give rise to some of the most talented names to lace up cleats and wear leather on the diamond. Among these legends were Josh Gibson, Oscar Charleston, and James â€œCool Papaâ€ Bell. Others were local legends on their way to making an impact on the national stage. Orange-raised Monte Irvin was such a name, as was Larry Doby, who made a permanent mark on the game as the first Black player in American League history. Each has since earned a plaque in Cooperstown.Â

â€œHe was one of the legendary players that called Hinchliffe home,â€ Kendrick said. â€œLarry Doby, in the annals of history, has kind of been the forgotten man. He shouldnâ€™t be. Larry Doby is as substantial to the story of the integration of our sport as anyone. As a society, we always celebrate the first. Jackie (Robinson) was celebrated, and rightfully so. But we lose sight. It was only a few weeks that Larry Doby joined the Cleveland Indians to integrate the American League.”

â€œLarry Doby went through just as much, maybe even more, than Jackie, because it was Cleveland, which almost was like being in the South.â€Â

Doby went on to play 13 MLB seasons, all but three of them in Cleveland. He was inducted into the Hall of Fame in 1998.Â

A mural paying tribute to Larry Doby stands just outside of the stadium, as seen here in 2020 (Photo: Geoff Magliocchetti)

Though best known for its spot in history created by baseball, the stadium made an immediate local impact through gridiron happenings.Â

One of its first events was the annual Thanksgiving matchup between Eastside and Central (which later became John F. Kennedy) in 1932, a tradition that carried on through the mid-1990s. Nearby Clifton High School would host games as well. In addition to the local antics, the stadium featured professional endeavors of at least three football teams: the Paterson Giants and Nighthawks, as well as the Silk City Bears. The Paterson Giants suited up weeks before Eastside and Central did, falling to the Portsmouth Spartans…a.k.a. the modern-day Detroit Lions.Â

Pigskins werenâ€™t the only things being passed in the confines of Hinchliffe; the stadium also featured professional auto racing events several years before NASCAR started its engines further down south. The noise of motors and the fragrance of gasoline could be detected for miles on race days.Â

Hinchliffeâ€™s auto racing endeavors would later be documented on Lost Speedways, a web television series dedicated to asphalt cathedrals lost to time or neglect. The episode is available to stream on Peacock.Â

The hits kept on coming for Hinchliffe, quite literally in the form of high-stakes boxing matches. John Regan, a former insurance examiner for the state of New Jersey, frequented the Hinchliffe stands for local events like the circus and holiday fireworks displays. Joining him in the grandstands was comic and Paterson native Lou Costello. Regan would also emerge on Hinchliffeâ€™s formerly green blades on the field as an outfielder.Â

â€œI was born three blocks from the stadium…My father fought there in the Diamond Gloves back in the 1940s. I played baseball there, so did my brother,â€ Regan said in recalling the impact Hinchliffe has left on his life. â€œItâ€™s a shame itâ€™s come to where they have to try and rebuild it again. It shouldâ€™ve never fallen into disrepair.â€

Even those away from the bleachers were making history at Hinchcliffe; the 1946 Diamond Gloves competition was the first New Jersey-based sporting event to be televised.

The fight to reclaim Hinchliffe from the elements and ages has only just begun, unfortunately. But through the efforts of locals like LoPinto and others, much-needed change is coming to Paterson. After countless bureaucratic and political errors…none of which, sadly, will appear on Hinchliffeâ€™s dilapidated scoreboard…things finally appear to be trending in the right direction.Â

In materials provided to ESM, one of the first steps LoPinto has outlined to get things rolling is the return of the home plate passed over by Doby, Irvin, and their compatriots to its rightful resting spot. In this endeavor, the FOHS is collaborating with the National Trust for Historic Preservation.Â

â€œThe return of the Negro Leagues diamond serves more than just a memory; it respects a crucial moment in African American history and ensures the critically significant baseball heritage isnâ€™t erased,â€ NTHP representative Brent Leggs wrote in a letter to Paterson Mayor Andre Sayegh. â€œThe original placement of home plate will also serve as a tangible lesson and authentic connection in place to many young athletes searching for their own Field of Dreams.â€

Stay tuned for Part II next Sunday, February 14, which will feature an exclusive interview with Larry Doby Jr.Â