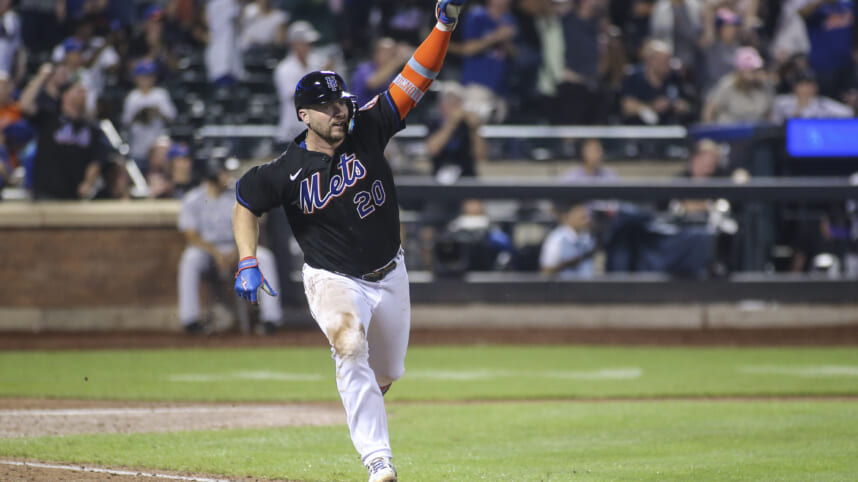 With two outs and two strikes in the ninth inning and the game-winning run on second base, New York Mets slugger Pete Alonso delivered.

The New York Mets won a come-from-behind thriller 7-6 at Citi Field. The Mets have now taken the first two games of this four-game set with the Colorado Rockies, a series they need to win.

Lineup provides three come-from-behind runs in the 8th and 9th:

Following 7.1 innings pitched, Mychal Givens came in for relief of Chris Bassitt. Bassitt threw 88 pitches, allowed four runs, all of which were earned, gave up eight hits, a walk, and had just one strikeout. His ERA is now 3.34.

Givens came in with the game tied at four and allowed two runs to come in on two hits. It put the Mets in a 6-4 hole in the eighth.

Edwin Diaz was in somewhat of a tough situation in the ninth, allowing a few hard-hit balls, but worked his way out of it. Diaz got the win in this one, his third of the year.

With one out in the ninth, Brandon Nimmo started the rally with a walk. After him, Starling Marte was hit by a pitch, giving the Mets two on with one out.

Francisco Lindor hit one very well to the opposite field that looked to be the game-winner. Left fielder Sam Hilliard made an incredible diving catch that just stayed in his glove.

Down 0-2 in the count with two outs, Alonso came through and won the game for the Mets. He hit one just arms reach from the diving third baseman, Ryan McMahon, into left field, and Nimmo flew home from second to win it.

First four runs driven in by Baty, Marte, and Canha:

For the second night in a row, Brett Baty had one hard-hit ball off the bat, this time, driving it the distance.

Baty hit his first home run at Citi Field. In the first pitch of the third inning, Baty, swinging, crushed one 389 feet with an exit velocity of 104.1 mph. The home run is the second of his young career and his fifth RBI.

Again, with two strikes and two outs, the Mets got runs across. In the bottom of the fifth inning, with two on, Starling Marte hit a line drive to the right-center field gap. It resulted in a two-RBI triple for the Mets All-Star. Marte now has 58 runs batted in on the year.

Lastly, taking it back to Canha, who has been terrific for the Mets as of late, he hit one off the wall in the sixth. With two strikes but in this instance one out, Canha nearly hit a three-run homer to left-center. It led to a run scored, which at the time gave the Mets a 4-3 lead.

This was one exhilarating win for the Mets, a game they had to have. Ultimately, while it was not pretty, they found a way. The Mets will look to keep it going with David Peterson tomorrow and extend this win streak to three games.