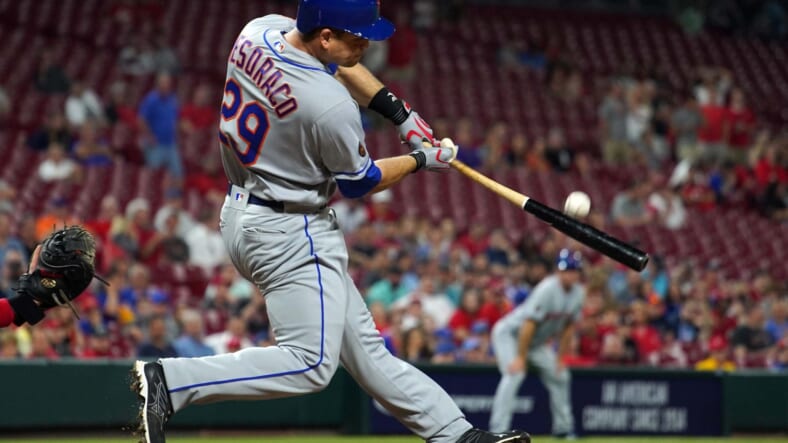 Devin Mesoraco is another member of the 2018 New York Mets class of former All-Stars. The one-time All-Star for the Cincinnati Reds never got close to that form following his 2014 campaign.

Mesoraco came to the Mets in the Matt Harvey trade which ended his painful 2018 campaign with the Mets. The trade was a way for each player to get a clean slate with a new franchise. Unfortunately, both of them never found any success during their one year run with their respective clubs.

deGrom’s Key To A Cy Young

When Mesoraco came to the Mets he assumed the catching duty for most of Jacob deGrom‘s starts. They developed a great relationship and over 21 starts he had a 1.60 ERA and Mesoraco threw out 33 percent of runners attempting to steal.

Mesoraco had his best offensive season during his time with the Mets. It was not All-Star numbers but his production proved his worth. He slashed .222/.306/.409 with 10 home runs and 30 RBI over 66 games. Defensively he had the worst season of his career, charting his lowest defensive runs saved.

Devin Mesoraco pads the lead with a bases loaded single.

The Mets brought him back for the 2019 season but he decided to “retire” when the Mets opted for Tomas Nido as the backup catcher. He wanted his release to keep playing but the Mets denied that request.

It was surprising considering deGrom’s favoring for him as his catcher and his numbers we good enough for a backup catcher. He fell below Wilson Ramos, Travis d’Arnaud, Tomas Nido, and Rene Rivera on the Mets catching depth chart.

In the end, he only played himself with verbal agreements. A .206 hitter who only averaged 45 games over the last four seasons felt he was better than playing in the minors. The gamble on himself did not pay off and he will unlikely never see a big-league roster again.