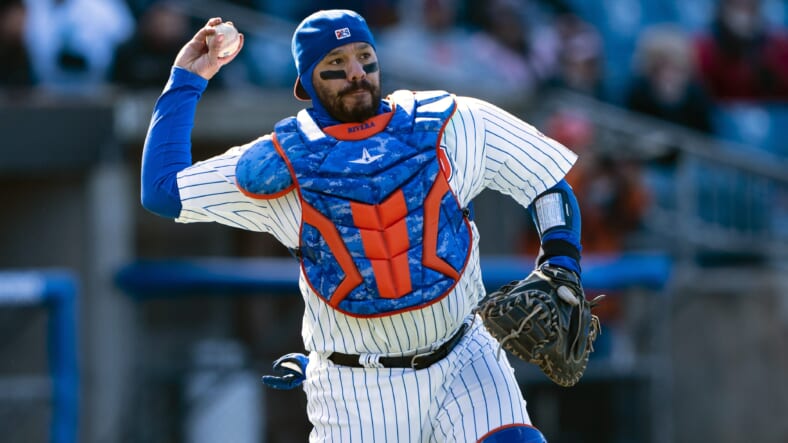 The New York Mets catching depth behind Wilson Ramos was extremely thin heading into Spring Training, but the Mets have brought back veteran catcher Rene Rivera. He comes back to the Mets on a minor league deal for the second consecutive year, and he also receives an invite to Spring Training.

Rivera will make $1 million if he lands on the major league roster along with another $300,000 in possible incentives. The 36-year old veteran is your prototypical backup catcher, pop in his bat, and very strong defensively. He only played in nine big-league games during the 2019 season, hitting .235. Rivera’s minor league was fantastic, he hit 25 home runs and threw out 52 percent of base stealers.

Projected trade piece Tomas Nido is the current Mets backup catcher. His name has come up in trade talks with the Pittsburgh Pirates, and Rivera would slot in place should the Mets acquire Marte. Discussions on Marte increased over the last week, and after the Atlanta Braves signed Marcel Ozuna, the Mets might look to equal the move.

Should Nido stay, both would compete for the backup catcher job. The Mets handed Nido the position last season, but he was not convincing as the man for the situation going forward. In 50 games, Nido only hit .191 and struggled to throw out any baserunners. The Mets will need some production from their backup, so Wilson Ramos can avoid playing in 140+ games in 2020.