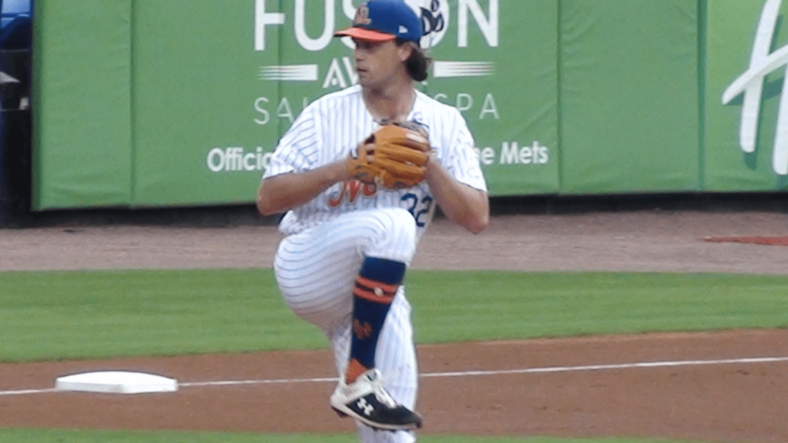 Kevin Smith is the prospect who came out of nowhere in 2019 to become one of the New York Mets‘ top-10 prospects.

Kevin Smith was a nondescript seventh-round pick for the Mets in 2018. A big lefty standing at 6 foot 5 inches and 200 LBs Smith always had a starters body, but there were questions about his stuff and delivery.Â  However, the Mets saw an advanced approach and ability to get batters out that others didn’t see.

They started Smith in Brooklyn with the Cyclones shortly after drafting him. He dominated the league with ease. He posted a 0.76 ERA, 2.43 FIP, 10.7 K/9, and 2.3 BB/9. He was clearly no match for the young international player and other college players at the level.

That wasn’t enough for Smith to be placed in the top-30 prospects for the weak New York Mets’ system at the beginning of the year though. Still, the Mets saw his domination and decided to up the ante in a big way in 2019. They had Smith skip A ball and go straight to A+ ball in St. Lucie. Smith responded with a phenomenal 17 starts in St. Lucie.

In those 17 starts Smith posted a 3.05 ERA, 2.63 FIP, 10.7 K/9, and 2.5 BB/9. He again showed that he was clearly better than the competition at that level. With that performance, Smith got the attention of the media scouts. He made his debut on the Mets’ top 30 prospects at the midseason report. He was now a top 15 prospect in the Mets’ system.

He had gone from another mid-round pick to a legitimate pitching prospect with his dominant performances.Â  However, questions over his ability to start long-term still loomed large. He tried his best to address those issues when he was promoted to AA Binghamton.

Smith made six starts for Binghamton as the season wound down. He put up a 3.45 ERA, 3.23 FIP, 8.0 K/9, and 4.3 BB/9. The ERA and FIP were good for Smith who showed he could continue to limit home runs and that lefties can’t touch him. However, the cracks in his game as a starter really began to show in AA. That didn’t matter much to the media scouts though, by the end of the season Smith was a top-10 Mets’ prospects for many outlets.

Smith has a three-pitch mix. He throws a fastball that sits low-90s but has a high spin rate that allows the velocity to play up. His best pitch is his slider that bites late and is particularly effective against lefties. It’s his go-to strikeout pitch and he relies on it often. Lastly, Smith throws a changeup that he has worked hard to turn into an average pitch. He mostly uses it against righties to get them off his slider.

Smith throws from a low three-quarters arm slot with a long extension that makes him hard to time. His funky delivery has given minor leaguers fits. AA is where hitters are going to stop being fooled by his delivery and that started to show in 2019 when his Ks dropped drastically and his BBs shot up.

While the Mets have stuck with Smith in the rotation there is reason to believe that Smith’s future is in the bullpen. Smith bounced from starter to the bullpen often in college for Georgia. So, he has experience coming out of the bullpen. More important though is his lefty righty splits. Lefties can’t hit Smith at all slashing .207/.271/.233, he’s just unhittable for them due to his funky delivery and his great slider. That’s not the case for righties who slash .268/.330/.385 against him.

Those numbers aren’t a concern right now, but they show a clear split that might cause issues in the major leagues, which could force Smith into the bullpen. That wouldn’t be the worst thing. Smith’s fastball and slider combo would play up in the bullpen, and his funky delivery would be that much harder to time up. He could be a very effective multi-inning reliever.

Whatever he’s a starter or a reliever Smith looks destined to reach the New York Mets in 2020. He’ll likely start the season in AA building on his short stint there at the end of last season. It’ll be interesting to see if the Mets put Smith in the bullpen in an effort to fast track him to the major leagues or keep him in the rotation in an effort to create more starting pitching depth.