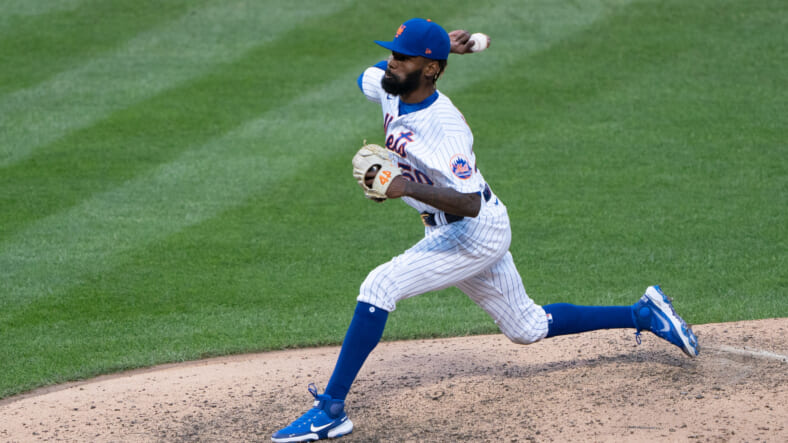 The electric Miguel Castro brought his sidearm style to the New York Mets at the 2020 trade deadline. He emerged as a useful reliever in the Baltimore Orioles bullpen, former GM Brodie Van Wagenen thought Castro would make a terrific addition to the Mets late-inning staff.

This 93 mph changeup by Miguel Castro last night was hellish.

Castro had not put it all together yet to rise to an All-Star capable level, but the stuff was there for him. For the first time in his career, he was finding success as a strikeout pitcher. In his two months with the Orioles, he had a 4.02 ERA in 15.2 innings pitched with 24 strikeouts. Castro’s 2.9 BB/9 were on pace to be the best of his career but ran into control issues again with the Mets.

Castro allowed runs in two of his first four Mets outings, which included an extra-innings loss against the Philadelphia Phillies. Five of the final six outings were scoreless, but Castro ran into control issues. During this span of games with the Mets, we saw Castro’s peaks and valleys on the mound. He looks electric with his sinker/slider combination in some outings, and in others, he shows the extra work he still needs.

Castro has the potential to be an elite reliever, but his consistency holds him back. Due to his sidearm motion, his mechanics are tough to repeat and have led to his erratic control. Castro tends to throw a pitch without any idea where it will end up, leading to his sinker finishing up in the zone. This is why hitters to the most damage off it and nothing off slider and changeup, which has better control.

As the Mets head into the 2021 season, Castro is a good option to a deep bullpen. He has a 4.06 ERA over the last four seasons, and his increased strikeout rate is a good thing to bank on. Castro has strikeouts stuff and is not far from being a reliever whose ERA is much closer to the threes. He likely does not get as many late-inning opportunity chances, but a middle relief role suits him rightâ€”Castro’s 3.34 SIERA and 33% strikeouts rate show he is trending in the right direction.

Changeup: 50 (55), This pitch has good potential, but the ability to locate it against righties can make it dominant.

Command: 45 (50), The command to be a late option is not there yet, but a full season with Jeremy Hefner should pay dividends.

Overall: 50 (55), Still just 26 years old and heading into his fifth full season in the big leagues. Expect the experience and talent to mesh together in 2021.