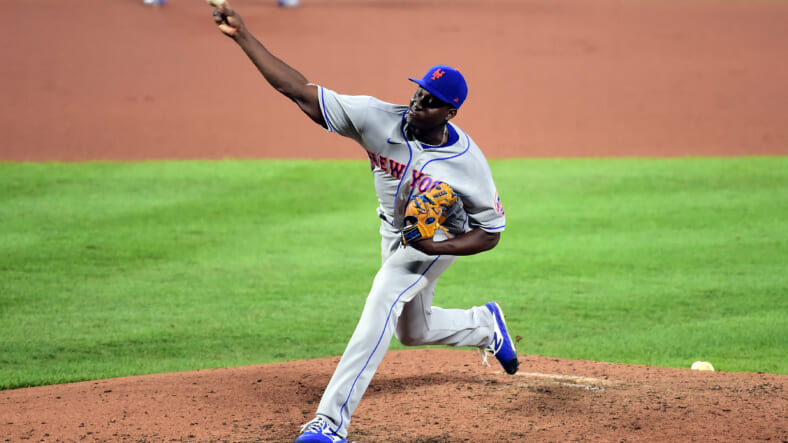 Franklyn Kilome made quite a few trips between the New York Mets shuttle in Queens and Brooklyn. All of his outings were long relief, and each of the four he made got continually worse. Despite the tough season, the Mets still have hope for Kilome’s future.

Long road back from 2018 Tommy John surgery to get to this point. pic.twitter.com/3CjVSrCcjc

Kilome joined the Mets roster for the first time on July 31. It only lasted for three days but made one long relief appearance against the Atlanta Braves. Kilome faired well in the outing as he worked four innings and allowed two runs while striking out five. After he went back to the alternate site the following night, he did not return until August 17.

In his second stint, Kilome allowed five walks over three innings but kept the Marlins to two runs. He also picked up his first career save in the outing, but control issues would continue to hamper him. Kilome went back and forth again to step into another long outing on August 18. It was another three-inning appearance where he allowed four runs and two homers.

After one more trip between the boroughs, he had a final outing against the Braves. It was the worse of the season, allowing six runs, two home runs, and three walks in just 1.1 innings pitched. High pitch counts summed up his season as he struggled to put hitters away efficiently.

Kilome showed good strikeout potential but is still working back from Tommy John Surgery in 2018. He has good life on his fastball, good movement on his curveball, and a promising changeup. Like most young pitchers, the command is going to make or break his career.

At 6’6″, there are plenty of moving parts in his delivery, making it hard to duplicate. Kilome’s biggest flaw is replicating the same front side movement. When it is in sync with his backside, he can pinpoint the ball right at the knees. The current motion is a good base; once he finds a good rhythm, Kilome should see improvement.

Overall, it was a very tough season for Kilome. He had an 11.12 ERA in 11.2 innings while allowing five home runs and walking nine. The 13 strikeouts are a positive point to reflect on, but it shows how erratic he is on the mound. It was Kilome’s first season pitching at any level above AA, and there is still plenty of learning to complete. Kilome is unlikely to make the roster out of spring training, but he is part of the weak starting pitching depth in their system.

Sinker: 35 (40), Not enough movement to be a reliable pitch. Four of seven hits against it went for extra bases.

Changeup: 20 (30), Still a pitch that needs work; just about half were thrown to the upper part of the zone.

4-Seam Fastball: 20 (45), Only threw 16 of them, and only two were put in play. If the downward movement on his sinker does not improve, he should throw the 4-seam more.

Overall: 20 (30), Still has some work to do to make a difference at the big league level.