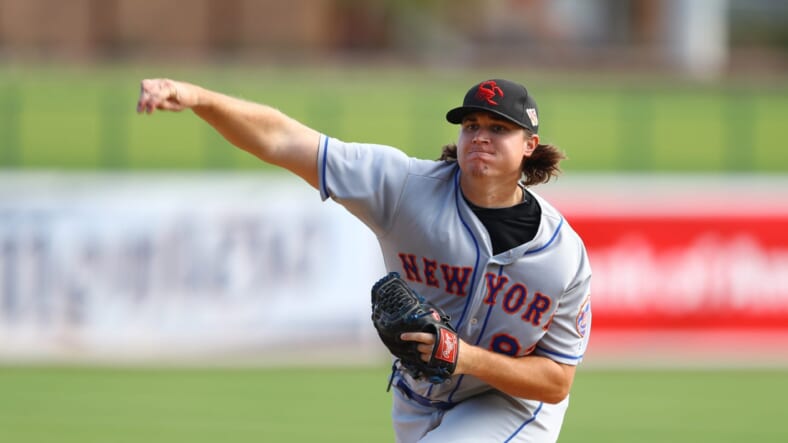 Corey Oswalt only pitched in four games for the New York Mets during the 2020 season. It only took one bad outing to elevate his ERA to a point where it looks like he had a rough season. The only rough part of Oswalt’s season was the inability to last on the big league roster for a long period.

DJ LeMahieu hits it hard in his first at-bat but Corey Oswalt gets a glove on it and knocks it down.

Only two or three innings from The Machine tonight, per Aaron Boone so we’ll see if he hits a second time. Timing looks solid though which is a great sign. pic.twitter.com/sCIRPyOD4G

Oswalt started the season on the Opening Weekend roster and was called into long relief duty quickly. During the 14-1 blowout against the Atlanta Braves, Oswalt came into allowed seven runs and three home runs in four innings. The following day Oswalt returned to the Mets alternate site.

Oswalt returned in mid-August and made an emergency start against the Miami Marlins. He faired well in 4.1 innings where he only allowed two runs on five hits with four strikeouts. Oswalt also did it on a very effective 44 pitches, which earned him the chance to remain with the team.

He returned to his long relief role a week later and threw four scoreless innings with three strikeouts on just 36 pitches. It was the first time he was finding consistent success at the big league level in his career. Unfortunately, right biceps tendinitis sent him to the 10-day IL but returned to the roster when healthy on September 20.

Oswalt threw two scoreless outs in his final outing of the season. The Mets optioned and recalled him a couple more times but never saw any more action. Despite having a 4.85 ERA, a 48.8% hard-hit rate, and a 17.1% barrel rate showed things could have been worse. Most likely, those inflated stats came from his outing against the Braves.

Overall, Oswalt only saw 13 big league innings, but many small sample size numbers work in his favor. He had a 20% strikeout rate and a 3.6% walk rate. Oswalt is still under 100 career innings, and we have not fully discovered if he can be a useful major league pitcher. He heads into his last year of team control and looks to be a swingman option for the Mets if they do not sign Erasmo Ramirez. Oswalt could also be in line for a handful of starts with the Mets pitching depth very thin behind their top three.

Sinker: 20 (20), Only threw it 5.4% of the time after throwing it in the 20s during previous seasons. It had better horizontal break than vertical, which made it a good call to go away from it.

Overall: 40 (45), Oswalt is an interesting case, but it is hard to see him as anything other than a swingman.