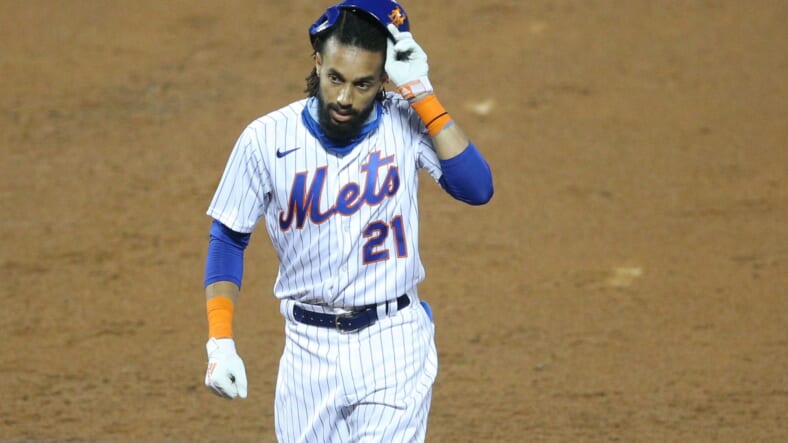 Brodie Van Wagenen added to his list of questionable moves as New York Mets general manager by trading for Billy Hamilton. They traded a pitcher with a 2.60 career minor league ERA for one hit from Hamilton as he struggled to make an impact with anything but his glove or legs.

The Mets received a month of Hamilton after trading away Jordan Humphreys. Hamilton only received five starts in 16 games which resulted in one hit over 22 at-bats. His sole purpose of joining the team was to add speed and outfield defense with Jake Marisnick dealing with his hamstring issues.

Hamilton was still a stolen base threat with three successful tries in four attempts. His only caught stealing came in a game where it almost cost the Mets a victory. After getting to second base, he decided it was a good idea to attempt to steal third with no one out in the inning. Thankfully, J.D. Davis bailed him out with a home run on the following pitch to tie the game.

Hamilton’s swing has continually gotten worse as it almost seems no hitting coach has tried to fix it at any level. His defense and elite speed are the only things that allow him to keep landing jobs at the big league level. The Mets ended up putting Hamilton on waivers in September and the Chicago Cubs claimed him.

Hamilton tripled his hit total in a Cubs uniform but it still left his hitting line at .125/.171/.219 over 32 at-bats. He also totaled three more stolen bases and overall continued to be an elite defender, with his arms and his legs all season. Hamilton should continue to get invites to Spring Training as long as he continues to run and defend well.

Power: 20 (20), Only one season above five home runs in his eight-year career.

Run: 80 (75), Might lose a step next year but still has elite speed and good baserunner.

Overall: 30 (30), Great personality but only a defensive/baserunning specialist at this point in his career.