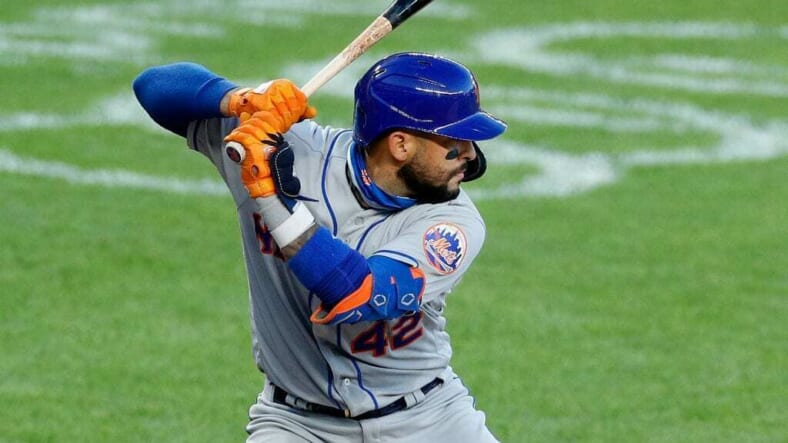 NEW YORK, NEW YORK – AUGUST 30: Ali Sanchez #70 of the New York Mets in action against the New York Yankees at Yankee Stadium on August 30, 2020 in New York City. The Yankees defeated the Mets 5-2. All players are wearing #42 in honor of Jackie Robinson Day. The day honoring Jackie Robinson, traditionally held on April 15, was rescheduled due to the COVID-19 pandemic. (Photo by Jim McIsaac/Getty Images)

The New York Mets were in desperate need of catching depth when they called upon Ali Sanchez as the last option before acquiring Robinson Chirinos. Sanchez struggled mightily and showed he still needed some more work before becoming a capable backup catcher at the big league level.

Sanchez made his MLB debut during a blowout loss to the Washington Nationals on August 10 but did not see action again until the end of the month. He returned on August 25 and had a real opportunity to secure a backup role. Tomas Nido and Rene Rivera were both out due to their respective injuries, and Wilson Ramos was the only big-league caliber catcher on the roster.

In his first major league start, Jon Berti made a mockery of Sanchez behind the plate. Sanchez fumbled the ball on a throw to second, and then a sleepy defense allowed a delayed steal of third. Finally, Berti stole home after Sanchez lobbed the ball back to the pitcher. It was a rough showing on defense and a passed ball and two wild pitches in five games.

As Sanchez rose through the minors, his bat lagged behind his good defense. He only had one hit in nine at-bats and looked a step behind at the plate. The one facet of his game that showed promise was his pitch framing. Sanchez had a 51.4% strike rate and succeeded the most on pitches on the zone’s left and right edges. On the inside corner to righties, he was at 69.6%, and on the outside, he had a 68.8% strike rate.

Sanchez’s short tenure ended on September 1, shortly after the Mets acquired Chirinos from the Texas Rangers. With Tomas Nido and Patrick Mazieka joining Sanchez as the only catchers on the current 40-man roster, he falls into three or four on the catching depth chart, assuming the Mets bring in another catcher.

Defense: 60 (65), Improvement to his blocking could move him into an elite defender.

Overall: 30 (35), Sanchez is heading into his age-24 season and has the tools to contribute at the big-league level. Just a matter of when he can put it all together.