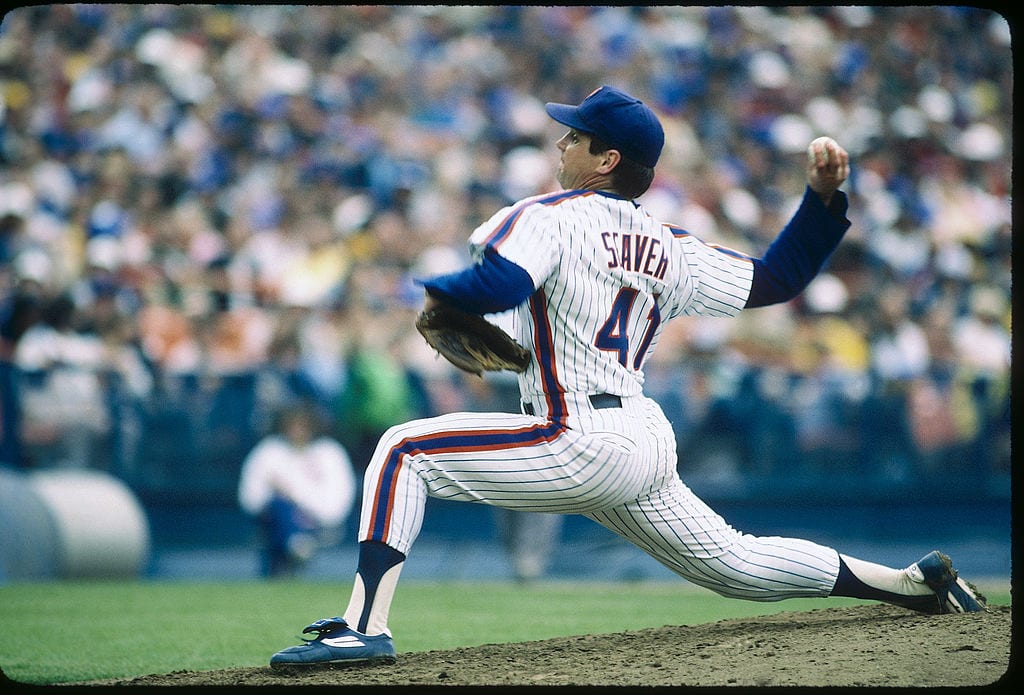 Tom Seaver, the Hall of Fame pitcher who led the New York Mets to their first World Championship and changed the culture of a losing franchise, died on Monday at his home in Calistoga, California, from complications of dementia, Lyme Disease, and COVID-19.

We mourn the passing of Tom Seaver, a Hall of Fame pitcher and World Series champion. He was 75. pic.twitter.com/KcSBQTk0rL

Seaver spent 20 seasons in the big leagues and 12 came with the New York Mets. He was inducted into the Major League Baseball Hall of Fame in 1992, with what was at the time the highest vote percentage any inductee at 98.8%.

Seaver was the greatest Met of all time and earned the nicknames “Tom Terrific” and “The Franchise” from Mets fans. He was a 12-time All-Star, won three Cy Young awards, three ERA titles, and the 1969 World Series with the Mets. His number 41 is one of the five retired by the franchise.

In 1969, he helped lead the Mets to a World Series ring with a 2.21 ERA, 25 wins to lead the MLB, and won his first Cy Young award. His first World Series win came in a 10-inning victory where he gave up only one run, which came from a sac fly on Ron Swoboda’s miraculous catch. The same year he flirted with perfection for 8 1/3 innings against the Chicago Cubs but lost it on a single to the infamous Jimmy Qualls.

In 1970, he set a major league record by striking out the final 10 San Diego Padres he faced. The performance also tied the National League record with 19 strikeouts in a single game. In 1973, Seaver led the league with a 2.08 ERA and a league-leading 18 complete games. In his four starts in the postseason that year, he went at least seven innings in all of them and gave up two runs or less.

In 1977, free agency started, and contract negotiations between Seaver and Mets’ ownership were not progressing. Seaver wanted to make what other great pitchers were making, but the chairman of the board, M. Donald Grant, refused to pay.

Before the deal was signed, Young wrote an unattributed story in the Daily News that said Seaver was being “goaded” by his wife to ask for more money because she was jealous that Nolan Ryan was making more money. The story did not sit well, and he and Seaver told de Roulet that he wanted to be traded immediately. Seaver was dealt to the Cincinnati Reds in 1977 for Pat Zachry, Steve Henderson, Doug Flynn, and Doug Norman.

On June 16, 1978, Seaver threw the only no-hitter of his career against the St. Louis Cardinals. Seaver threw five one-hitters with the Mets but was never able to seal the deal in blue and orange. He spent six seasons with the Reds and won 75 games with a 3.18 ERA.

Seaver returned to the Mets in an offseason trade after the 1982 season. The 38-year old Seaver only won nine games but had a 3.55 ERA in 1983. In 1984, the Chicago White Sox claimed Seaver from the Mets in a free-agent compensation draft. Seaver only spent two and a half seasons with the White Sox but recorded his 300th win as a White Sox.

In 1986, Seaver pitched in his 16th and final Opening Day as a member of the White Sox. The White Sox dealt him midseason to the Boston Red Sox, who the Mets defeated in that year’s World Series. Seaver’s 311th and final win came on August 18, 1986, against the Minnesota Twins. He tried to come back during the 1987 season, but he said, “I’ve used up all the competitive pitches in my arm.” At that point, Seaver announced his retirement, and in 1988 the Mets retired his number. It was the first position player to have his number retired by the Mets.

Over the years, the Mets brought him back for multiple special occasions. He threw out the last pitch at Shea Stadium, the first at Citi Field, and the first pitch of the 2013 MLB All-Star game at Citi Field.

Unfortunately, his dementia impacted him to a point where he could no longer make any public appearances starting in March 2019. Seaver was absent for the 50th anniversary of the 1969 championship team. Seaver married his wife, Nancy Lynn McIntyre, on June 9, 1966. They had two daughters, Sarah and Annie. He was one of two pitchers to have 300 wins, 3,000 strikeouts, and an under 3.00 ERA. Seaver has a special place in baseball history and is an immortal figure in Mets history.