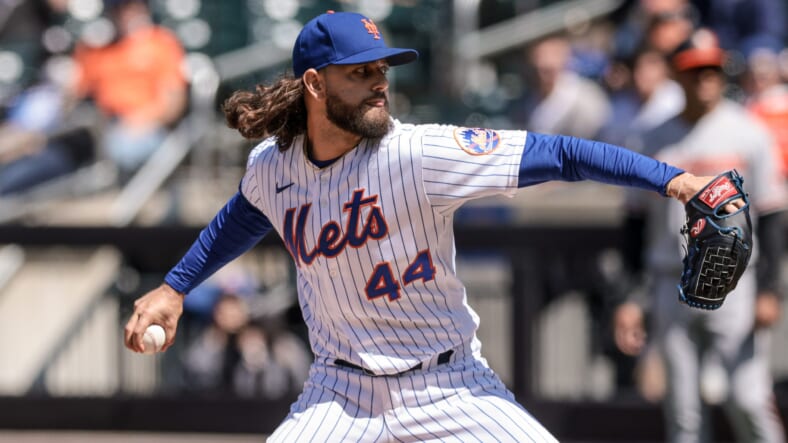 The New York Mets are no stranger to injuries but were lucky enough to receive some players back this week. Jeff McNeil and Michael Conforto rejoined a lifeless offense, which helped lead to a seven-run outburst in Wednesday’s victory. Who else should the Mets expect to return from the IL?

Marcus Stroman is optimistic he can make his next start, per Rojas. Mets will take it day by day. His hip still feels sore today.

Marcus Stroman avoided a big scare after he left Tuesday’s start early with a hip injury. Manager Luis Rojas said Stroman would not need an IL stint, and Stroman expects to make his next start. With another doubleheader coming up on Friday, the Mets will need all arms available over the weekend. Before the injury, Stroman had gone at least six innings in nine consecutive starts.

Jonathan Villar is still day-to-day with the calf injury he suffered during Monday’s doubleheader. He missed the rest of the games against the Braves, but he was available off the bench in Wednesday’s finale. Thursday’s off-day should serve as all the rest Villar needs to return. It will be interesting to see where Rojas bats Villar with Jeff McNeil healthy and batting leadoff while he has been sidelined.

Brandon Nimmo is in the middle of a rehab assignment with the Syracuse Mets as he recovers from a slight ligament tear in his middle finger. Nimmo has gone 1-for-7 with a walk and has been playing center field as well. He always had one rehab assignment shut down after soreness in the finger. If Nimmo continues to progress, he should rejoin the Mets next week.

J.D. Davis is still in his long rehab from a sprained left middle finger but is on track to play in minor league games within the next two weeks. If all goes well, Davis should rejoin the team just after the All-Star break. Davis has already suffered multiple setbacks, and having him play games is a huge step towards getting his bat back. He was one of the few Mets hitting well before landing on the IL. Davis batted .390/.479/.610 with two home runs in 14 games.

Tomas Nido was not as lucky to avoid IL time after getting hit in the hand by a Shane Greene fastball. Nido only suffered a contusion to his right wrist. The Mets have not set a date for Nido’s return, but he should not be out for a long time. Walk-off hero, Patrick Mazeika, is the backup catcher until Nido returns.

Robert Gsellman landed on the 60-day IL with a torn right lat and was another pitcher who struggled before his injury. Gsellman had a 2.42 ERA in 13 games to start his season, then gave up five runs in his final two outings. Recovery usually takes 6-8 weeks for lat injuries which keeps him out of action until August.

Jeurys Familia was another surprising injury after being a workhorse out of the bullpen. Familia landed on the 10-day IL with a left hip impingement, and the Mets have no timetable for his return. Before the injury, he was having a solid season with a 3.63 ERA but struggled in the three games leading up to landing on the IL. Familia allowed five runs in those three games after a stretch where he was scored upon once in 20 outings.

Joey Lucchesi‘s season came to an unfortunate end when he found out his torn UCL needs Tommy John Surgery. Lucchesi will miss the rest of 2021 and puts his 2022 season in jeopardy. He was having his best stretch of the season where he had a 1.19 ERA in his last five starts before getting shut down.

Johnseshwy Fargas (separated shoulder) and Jordan Yamamoto (right shoulder soreness) are out indefinitely with their respective injuries. The Mets were cautious with Yamamoto as shoulder injuries can have very damaging effects if mishandled.

Where Have You Been?

Dellin Betances is back throwing in minor league games with very mixed success. In Single-A, Betances had two scoreless outings but had an outing where he allowed five runs and two walks while only recording one out. Betances is currently in Triple-A, where he has one scoreless outing while working around two hits. His velocity is still in the low-mid 90s, and he still has not proven he is a big-league caliber pitcher since he left the Yankees.

Carlos Carrasco has resumed throwing on flat ground as he recovers from a hamstring injury. He has gone through several setbacks in his return from injury, but throwing again gives hope he can return down the stretch run. Carrasco is getting close to Jed Lowrie’s levels of health issues, and the second half will determine if he is Lowrie’s pitching counterpart.

Noah Syndergaard is about another two weeks from restarting a throwing program after being shut down in late May. He still aims to return this season, but the delayed timeline certainly threw a wrench in the Mets’ plans. If Syndergaard suffers another setback, we may not see him throw a pitch this season.