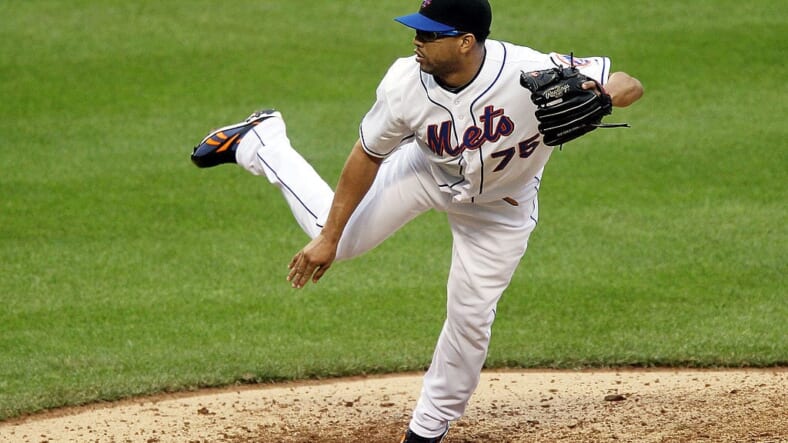 NEW YORK, NY – JUNE 23: Francisco Rodriguez #75 of the New York Mets delivers a pitch against the Oakland Athletics at Citi Field on June 23, 2011 in the Flushing neighborhood of the Queens borough of New York City. The Mets defeated the A’s 4-1. (Photo by Jim McIsaac/Getty Images)

Francisco Rodriguez sits fourth on the all-time saves leaderboard with 437 but is on a quest to add a few more to that number. The 38-year old former New York Met wants one last shot in the show, while it might not be as a closer, he still wants to pitch.

Francisco Rodriguez negotiated with the Mets this winter. Money didn't come close to Brewers offer. He does want to return one day to Mets.

The rumblings years ago talked about K-Rod’s possible Mets return, but the numbers did not add up. During an interview on Instagram live, he was confident that he could return to the big leagues again. The odds are against him due to his age and that he has not pitched successfully in the big leagues in four years.

What’s Left in the Tank

When he last pitched in 2017, he had a 7.82 ERA over 28 games with the Detroit Tigers. He ended up pitching with the Nationals but never made it to the big leagues with them. Rodriguez moved on to independent ball with the Long Island Ducks. He had a 2.76 ERA with 27 saves during the 2018 season. During 2019 he only pitched 8.1 innings in the Mexican League and allowed four runs.

Rodriguez had to make a transition from his electric stuff to adding another dominant pitch when his velocity dropped. During the shift towards the end of his career, it will be in his ability to move from closing to middle relief. In the 13 seasons, after he became a full time closer, he only had three where he saved less than 20 games. He had a 30 save season with four different teams, which shows how he has evolved over his career.

The only question now is which team is going to take a risk on him. Much like Bartolo Colon, it is a high risk to bring back an older pitcher who has been out of the big leagues for at least a year and a half.