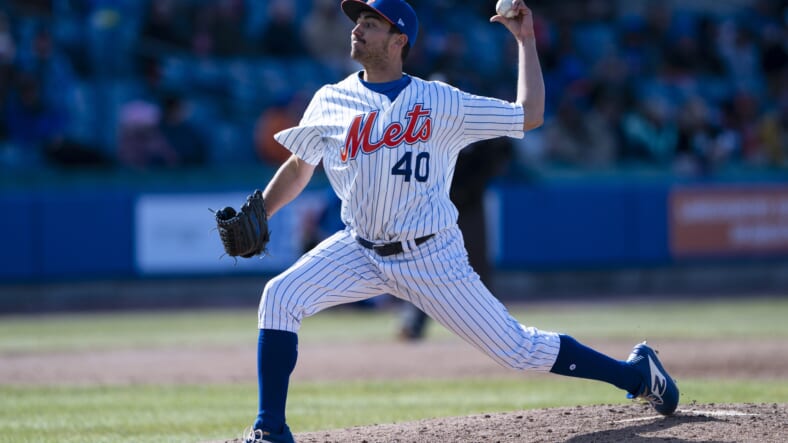 The lefty specialist Daniel Zamora had a small sample size with the New York Mets in 2018 and saw very similar amounts of action in 2019. He was a killer against left-handed hitters in 2018, but the same success lacked during the 2019 campaign.

Zamora’s never going to be a pitcher who will eat innings as only five of his outings in 2019 lasted one inning. In April, he came up for the first time in the season and faced five batters over three outings without allowing a run. He stuck around for the majority of May as well.

Tough Ending to May

Zamora got his ERA down to 1.59 and faired well in his role to get left-handed hitters out. His last outing in May resulted in allowing three runs, including a homer, to the Los Angeles Dodgers. Zamora went back to Syracuse on May 31 when Seth Lugo came off the Injured List.

Mickey Callaway advice to Daniel Zamora re his Fastball (no need to be fine with it/slider sets it up/change of speeds vs worrying about spotting up on the corners). pic.twitter.com/1R5ZkQMGqp

Zamora only had one other outing before September. In September, he allowed one run over five outings. Zamora pitches such a small amount of innings that any amount of runs allowed will inflate his ERA. He only allowed runs in three outings and only once he allowed more than one.

Zamora will have to adjust to MLB’s new rules, which will force him to face three batters before he can leave the game. It will be interesting to see how Carlos Beltran uses him in Spring Training and the regular season. Zamora is the only pitcher the Mets have who could run into an issue with the rule.

His splits were relatively equal, with hitters from both sides hitting .294. Right-handers hit for a little more power than the lefties. Zamora will likely have a limited role again in 2020 and will have to get right-handers out to stay. The new rules will make it harder for him to live on his slider, which he throws 72% of the time.

Pitching Repertoire: B-, He pitches backward due to his fastball staying in the high 80s. His slider is a nasty pitch, and he can throw it at different speeds with different breaks.

Composure: C+, Still needs more work with right-handers, but has the toughness to get the lefty out in a big spot.

Intangibles: B+, Very deceptive motion, which is what makes him so tough to lefties. The ball looks like it starts behind them.

Overall: C, The ERA is not where he wants it to be, but it was not a bad season. His average against lefties also needs to decrease in 2020.