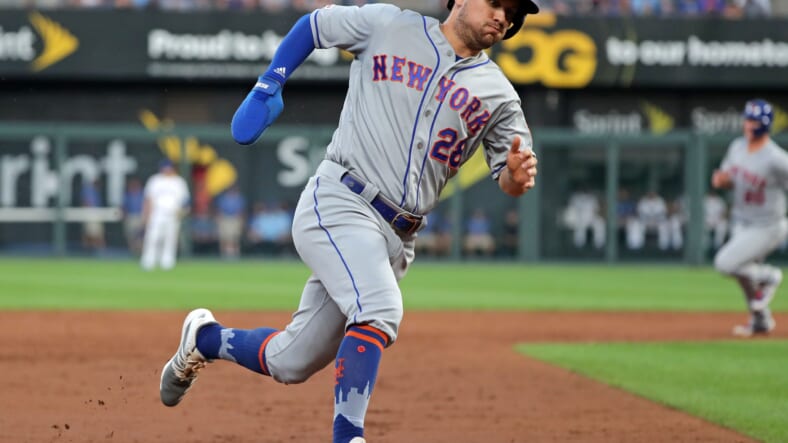 J.D. Davis burst onto the scene with the New York Mets in 2019 but did not rekindle the same success during 2020. A decline in power and below-average defense left Davis off the Top-10 list going into the 2021 season. Can Davis get himself into the upper echelon of third basemen this season?

Davis is coming off a loss in arbitration but still gets a raise in this season’s salary. The main cause of his loss was a drastic drop in his slugging percentage from .527 to .389. Despite the power loss, the metrics show Davis should have been better than what the slugging percentage portrayed.

The slight decreases in Davis exit velocity, hard hit, and barrel rates were not enough to lead to a poor season. The main reason was his average launch angle falling from 10.6 to 3.3. Davis hit into eight double plays due to his hard groundballs becoming easy double plays. He should benefit from Chili Davis returning to in-person work this season as he was a big part of J.D.’s past success.

Davis had the highest walk rate of his career while keeping his strikeout rate at his career norm. If Davis can combine his selectiveness with power, he will produce more than he did in 2019. At his peak, Davis gives Jeff McNeil a run for his money as the most complete hitter on the roster.

The defense is the worrisome part of Davis’s game. His arm is strong enough to play third base but getting to the ball is the tough part. Davis struggles with the ball right at him, and a majority of those are balls he charges. Fixing his release and focusing on better angles to the ball will improve his ability to cover slow rollers. Davis solid moving to his right but is tremendous at moving towards the shortstop/third base hole. The combination of Lindor/Davis should bode well for the Mets pitching staff.

Giving Davis the ability to spend an entire spring training at one position is something he has not done since joining the Mets. Davis will never turn into Matt Chapman defensively, but he should give the Mets fewer troubles on defense. If Davis is average defensively, he will earn himself a spot in the top-10 third basemen in baseball.