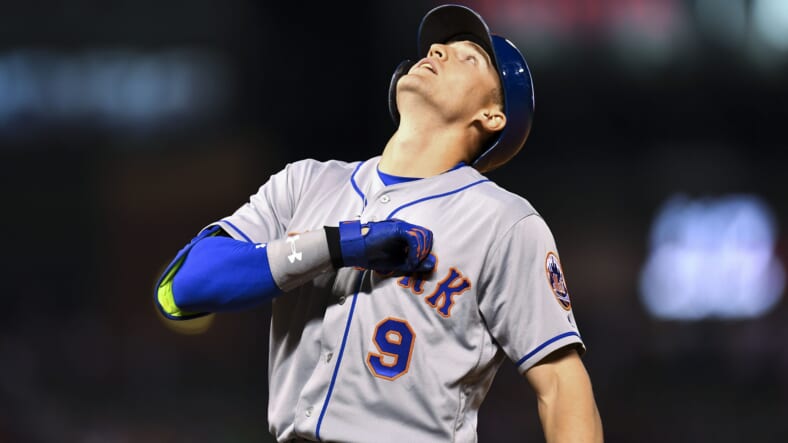 Brandon Nimmo was slated to be a table setter for the New York Mets in 2019, but an unfortunate injury forced him to miss a chunk of his season. Nimmo returned to his 2018 form towards the end of the year and gave hope that he will be a star for the 2020 season.

He made a name for himself due to his infectious smile, hustle and genuine love for playing the game. Nimmo was the original lead off hitter, but fell in the order due to his high strikeout totals. He battled through a neck injury for almost two months, but it took a toll on his numbers. Nimmo only hit .200 with three home runs, 14 home runs and 48 strikeouts in 130 at bats through May 20th.

Nimmo was on the shelf until the beginning of September due to his neck. During that period of time, it gave J.D. Davis and Dominic Smith the opportunity to shine. Both took advantage of their playing time which helped bring the Mets back into the race. In turn, this made it hard for Nimmo to play everyday once he finally returned.

When Nimmo played, he made it impossible to get him out of the lineup. He returned to being a dominant on base machine and reclaimed the role as the leadoff hitter for the Mets. Nimmo had a .261 average, .995 OPS, five home runs, 15 RBIs and 20 walks.

This was the Nimmo the Mets expected to see from the beginning of the season and if healthy, he adds to a dominant Mets outfield for 2020. His only criticism at a hitter has to come with the amount of times he strikes out. Â Some of his strikeout totals will be higher because he works deep counts, but the more he limits his strikeouts, the better he will be.

Hitting for Average: D+, Unfortunately his September was a case of too little, too late. He still finished the year a .221

Hitting for Power: C: Only 8 home runs in 199 ABs, but showed promise in September

Defense: C+, Not great, but not bad either. Average to below average in left and center field.

Speed/Baserunning: C-, 3 for 3 in Stolen Base opportunities. He is a good baserunner, but is too fast to only steal three bags.

Intangibles: A+, No one else on the roster can match the hustle and drive of Nimmo

Overall: D+, His September is the only thing saving him from being an F. Do not give up on him, he is poised for an All-Star 2020 season.