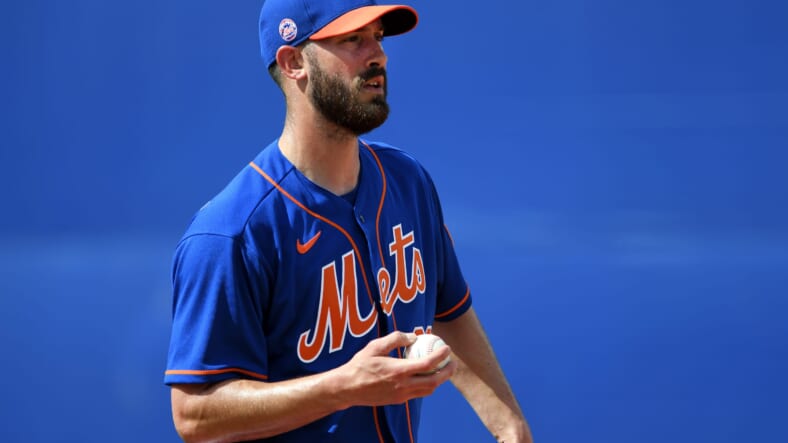 Edwin Diaz woke up a sleeping giant when he allowed Saturday’s game-tying home run to Marcell Ozuna. The Atlanta Braves carried the momentum from their extra-inning win to steamroll the New York Mets 14-1.

The Mets say they're flexible on most issues, but they've made it clear that they're dead-set against moving Seth Lugo from the bullpen.

Given the state of their rotation (they don't have a starter for Game 5 of the season), I'm not sure how you don't at least revisit that.

It did not take long for the Braves to spoil Rick Porcello‘s Mets debut. Porcello lived up to his 5.5 ERA from the 2019 season to allow seven runs on seven hits, with three walks and failed to record an out in the third inning before his outing ended. Corey Oswalt replaced him and pitched how you would expect a pitcher with a career ERA over six to pitch.

The Braves jumped all over Oswalt to add three home runs and five more runs to their total. Every player in the Braves starting lineup recorded a hit, and they scored in six of the first seven innings. Dansby Swanson and Ozzie Albies did the most damage on the day.

Braves starter Sean Newcomb gave the Mets every opportunity they could ask to push some runs across. Newcomb struggled to find consistency with any of his pitches but got out of trouble when he needed to. The combination of hitters who are not ready and the hangover of Saturday’s loss created a team that had no energy and was as flat as the cardboard cutouts surrounding the field.

The Mets had at least two runners reach base in each of the first four innings but only scored once. It allowed Newcomb to get through 3.1 innings, only allowing the one run when allowing seven baserunners. Jholuys Chacin shut the Mets down with 3.2 shutout innings in relief of Newcomb, quieting any hopes the Mets had of coming back.

Most concerning for the Mets is only recording five runs over the first three games of the season. Pete Alonso has only recorded one hit and timing looks completely off through his first handful of at-bats. With the Mets starting rotation in shambles, they needed plenty more from their offense to be competitive.

Michael Conforto and Brandon Nimmo are the only two hitters posing a threat right now. Conforto went 4-for-8 and Nimmo 3-for-10 in the series, both putting together long at-bats in the process.

Eduardo Nunez came in during the blowout and injured himself, trying to leg out a groundball in the 14-1 blowout. He dealt with knee issues over the last two seasons and said he hyperextended his knee. The Mets will evaluate him before Monday’s game, but the Mets also have backup infielders Luis Guillorme and Andres Gimenez on the roster.

Speaking of Monday, the Mets begin a four-game home and home series against the Boston Red Sox. It will be their first interleague matchup of the season and the first time playing in Fenway Park since 2018. Michael Wacha makes his Mets debut and hopes his first start is the complete opposite of Porcello’s. The Red Sox will use Josh Osich as the opener for game one at 7:35 p.m.