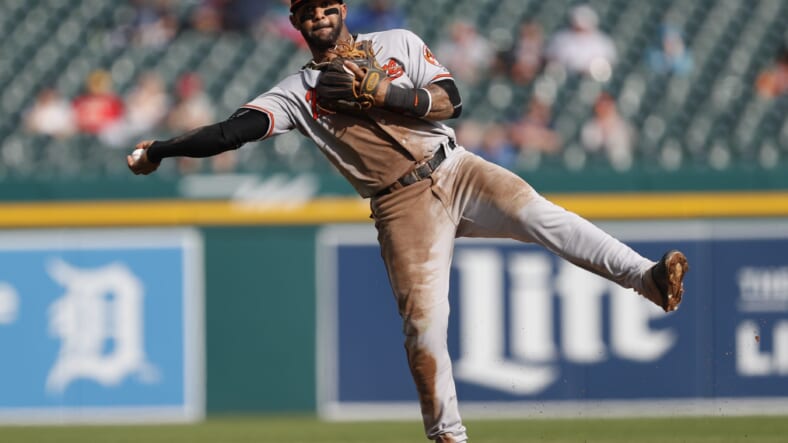 Sep 15, 2019; Detroit, MI, USA; Baltimore Orioles shortstop Jonathan Villar (2) makes a throw to first base for an out against the Detroit Tigers during the eighth inning at Comerica Park. Mandatory Credit: Raj Mehta-USA TODAY Sports

The New York Mets made another move to improve their infield depth, adding versatile IF/OF Jonathan Villar in a major league deal.

MLB Network’s Jon Heyman was the one breaking the news this time.

Villar was reportedly on the verge of signing with the Cincinnati Reds, but the New York Mets moved quickly to close the acquisition.

According to Heyman, the contract is worth $3.55 million and comes with certain performance incentives to make it attractive to Villar.

The expectation is that Villar serves a super-utility role for the Mets. He is capable of playing second base, third base, shortstop, and outfield.

How Villar can help the Mets

Overall, Villar is a versatile fielder (capable of playing several positions around the diamond, as previously stated) although not necessarily a good one. He is, however, an excellent basestealer.

The Mets could theoretically have him play some second base, sliding Jeff McNeil to third and JD Davis to the bench. That wouldn’t be an everyday arrangement, though.

The New York Mets’ offseason isn’t necessarily over, as they might go after center fielder Jackie Bradley, third baseman Justin Turner, or another reliever, but the Villar signing makes it slightly less likely.

Since they lost on George Springer and Trevor Bauer, they have the ability to spend some more funds if they consider it necessary. For now, though, most of the roster is set.