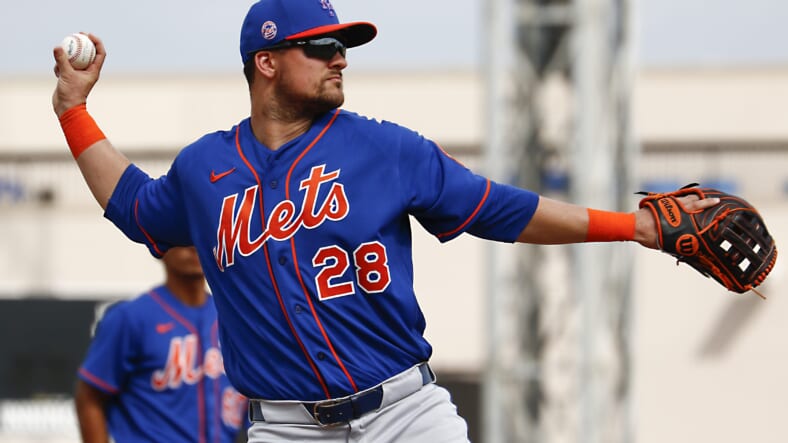 The New York Mets, looking for some roster flexibility and with the best interest in mind about third baseman JD Davisâ€™ health, decided to place him on the 10-day injured list, retroactive to April 7, with a left hand contusion according to Deesha Thosar of the New York Daily News.

The Metsâ€™ third sacker suffered the injury on Tuesday, after being hit by a pitch on his left hand by a 90 mph Chase Anderson fastball and not being able to recover as quickly as the team had hoped.

X-rays taken to Davisâ€™ hand this week were negative, but the Mets decided that they needed his roster spot for as many days as he remains on the shelf. He will now spend at least another week sidelined with his ailment.

In corresponding moves, infielder Jose Perazaâ€™s contract was selected by the Mets from the alternate training site, and right-hander Franklyn Kilome was designated for assignment to open up a 40-man roster spot for Peraza.

While Davis is out, utility infielders Jonathan Villar and Luis Guillorme are expected to see more starts at third base and second base.

The Mets hope to have Davis back soon

Davis, acquired by the Mets before the 2019 season from the Houston Astros, is not expected to require more than the minimum stay on the injured list.

However, last year he struggled to a .247/.371/.389 line and a .339 wOBA in 56 games, with six home runs. Even though he was still an above average hitter for the Mets by virtue of his 116 wRC+, it was clearly a down year by the talented slugger, who clearly suffered the absence of Chili Davis for COVID-19 related concerns.

Once he returns to full health, Davis will regain his third base position and start to find his rhythm back.