Metsâ€™ Noah Syndergaard returns with a bang; hopes to be back in New York next year 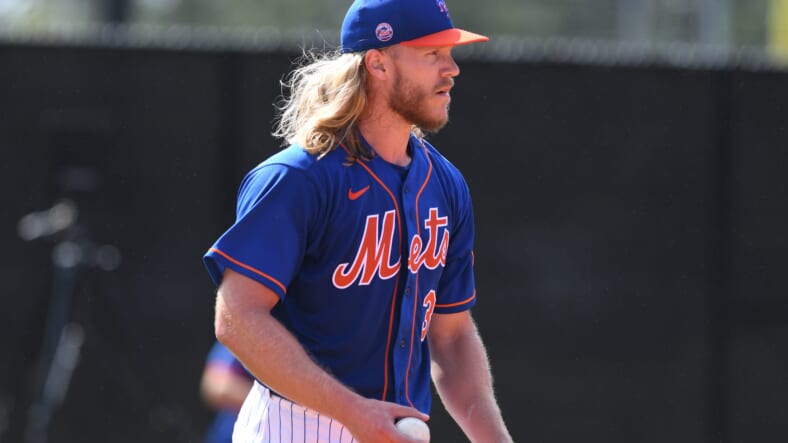 After undergoing Tommy John surgery in the spring of 2020, and encountering several setbacks along the way, New York Metsâ€™ pitcher Noah Syndergaard made his long-awaited return to action at Citi Field on Tuesday against the Miami Marlins.

It was his first start in 730 days, so you would imagine there was some adrenaline in his body when he took the mound. The Mets are out of the race, so the crowd was evidently not the biggest, but those in attendance cheered as â€œThorâ€ threw a perfect inning with two strikeouts.

In total, he threw 10 pitches: only fastballs and changeups, as advised by the Metsâ€™ medical staff because sliders and curveballs would result in additional stress for his elbow. But his stuff was impressive: the heater reached 96 mph with plenty of carry, and the change was nasty, too.

â€œWhen I was walking out of the dugout, hearing the fans, I almost had to shed a little tear,â€ Syndergaard said to MLB.com. â€œIâ€™m not really an emotional guy, but it definitely got to me.â€

Will he return to the Mets next season?

Even the opposing manager was happy to see the Metsâ€™ star pitching after such a long layoff. “It was good to see Noah get back out there, honestly,â€ Marlins manager Don Mattingly said. â€œYou hate to see guys go two years battling that.â€

Syndergaard plans on pitching another time over the weekend against the Atlanta Braves. After that, he will be a free agent, but hopes to be back next year.

He will likely get a one-year qualifying offer from the Mets, and there is a good chance of accepting it, like Marcus Stroman did this year, to show he can throw breaking balls and rebuild his arm to suit a regular starterâ€™s workload. Then, if everything goes according to the plan, he could re-enter free agency after the 2022 campaign.

â€œIt would be something I would be extremely grateful for,â€ Syndergaard said of the qualifying offer. â€œWeâ€™ll cross that bridge when we get there. Itâ€™s definitely something Iâ€™m hoping for.â€

â€œIâ€™m pretty confident that weâ€™ll reach an agreement, and Iâ€™ll be pitching here next year. Iâ€™d love nothing more than that. New York has a special place in my heart, and always will.â€