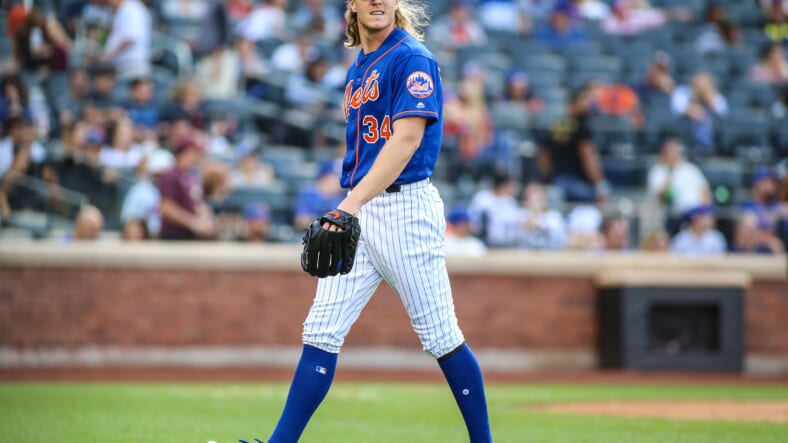 The New York Mets, losers of eight of their last eleven games, have ceded a lot of ground in the NL East division race even though they won on Sunday. They are currently 73-77, third in the table and 5.5 games behind the leaders, the Atlanta Braves.

The situation isnâ€™t much better in the Wild Card race, either, so the Mets have no choice but to win most of their remaining games and hope for the Braves (and the Philadelphia Phillies) to slide.

Some help could be on the way. Jacob deGrom is throwing from a mound and should not be far from a return, while Noah Syndergaard, who underwent Tommy John surgery last spring, is also on his way back.

Syndergaard suffered a setback in late May, when he nursed right elbow inflammation that prevented him from throwing for six weeks. After slowly, but surely working his way back to New York, he threw 15-20 pitches during a live BP session on Sunday, in what was his second time facing hitters since a COVID-19 diagnosis forced him to quarantine for 10 days.

The Mets are still weighing their options

According to the Metsâ€™ official site, they are now â€œconsidering activating Syndergaard without sending him back on a Minor League rehab assignment, though thereâ€™s a chance theyâ€™ll play it safe and test him in a more controlled Minors environment instead. Either way, Syndergaard has a decent shot of returning on the Metsâ€™ upcoming road trip through Boston and Milwaukee.â€

The Metsâ€™ bullpen hasnâ€™t been bad in 2021, but it could definitely use a spark such as the one Syndergaard can definitely provide.

There is an issue, though: the Mets will not let him throw sliders and curveballs, as they generate too much stress in his right arm. That has been the advice from doctors and specialists to Syndergaard. Instead, he will be a two-pitch reliever in the stretch run: he will only throw fastballs and changeups.