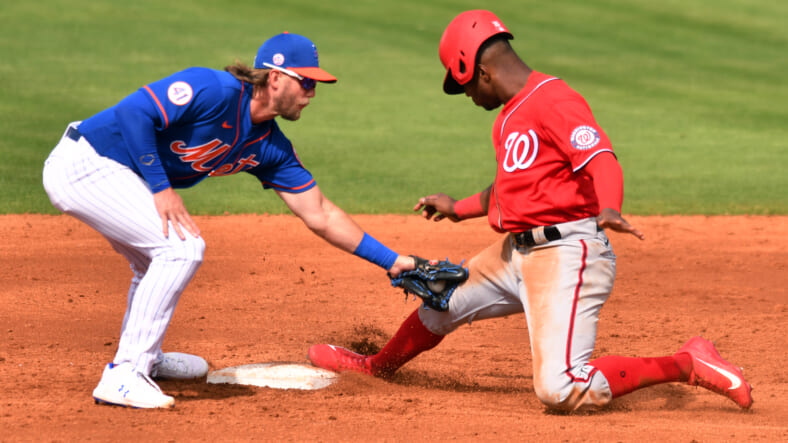 The New York Mets and Washington Nationals played a make-up game from their opening series of the season and the Mets wish they had their off-day back. It only took two pitches for the Nationals to get a lead and they rode it to an exciting 8-4 win and move within three games of first place.

Mets radio broadcaster said starter Jerad Eickhoff began the game by throwing “batting practice” to the Nats, and he was spot on with his description. Kyle Schwarber and Trea Turner opened up with back-to-back tape measure home runs to get out to a 2-0 lead. Gerardo Parra added another homer in the second inning as all Eickhoff allowed was hard contact.

It looked like Eickhoff would settle in, but Schwarber tagged him again for another homer in the fifth. Schwarber tied an MLB record by hitting 15 home runs in 17 games, making him an impossible hitter to slow down. Starlin Castro finished off Eickhoff in his final inning with an RBI single. Overall, Eickhoff lasted six innings, allowing eight hits, five runs, and four home runs.

As usual, the Mets could not get any offense against a starting pitcher. Paolo Espino was the beneficiary as he shut out the Mets for five innings, working around five hits while striking out five. The Mets had some hope when the Nats bullpen had to figure out how to keep the lead for 12 outs.

Jeff McNeil got the Mets on a board with a seventh-inning single, his second hit of the night, which broke an 0-for-12 slump. Pete Alonso‘s two-run home run and Billy McKinney‘s solo shot were back to back, putting the Mets deficit at just one.

Things got dicey in the bottom of the eight, and it was due to the shift once again. Travis Blankenhorn had 18 career big-league innings at second base coming into the night, and his inexperience showed in a double-play situation. Castro hit a double-play ball right a Francisco Lindor, but Blankenhorn ranged to his right, vacating second base and cutting in front of Lindor. The Mets ended up getting no outs on the play, and Blankenhorn threw the ball away, resulting in runners on second and third.

Ryan Zimmerman made the Mets pay for continuing the inning with his three-run home run, which effectively pushed the game out of reach. Nats closer Brad Hand finished off his five-out save with a 1-2-3 ninth to complete the victory. The Mets made three errors on the night and were thoroughly outplayed in almost every aspect of the game. They will try to rebound in a critical three-game series in Atlanta against the Braves. Tylor Megill makes his second career start against Charlie Morton.