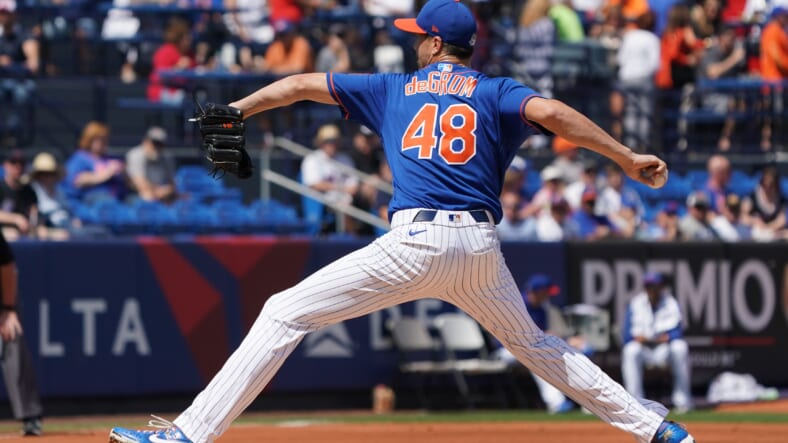 Jacob deGrom has exceeded any expectations the New York Mets, or their fans could have ever imagined from him. He set a new career-high with 15 strikeouts in his second career complete-game shutout to give the Mets a 6-0 win over the Washington Nationals.

Sheesh. Witnessing the best to ever do it in real time. Beyond a pleasure to watch each time Jacob deGrom touches the mound. These numbers won’t be replicated for a long time. We’ll be telling our grandkids about this man. LEGEND! ? @Mets

deGrom had everything working from the beginning and carried it all the way to the end of his outing. He began the night by reaching 101 mph on the radar gun, then completed his outing by retiring the final 19 batters he faced. deGrom’s 50 strikeouts this season set a record for the most strikeouts in MLB history through the first four starts of a season. He even garnered MVP fans from the contingent at Citi Field.

Despite the easy victory, it looked like a typical deGrom disappointment through the first half of the game. With no one out, the Mets stranded a runner at third base in the second inning to continue their painfully bad hitting with runners in scoring position. In the fifth, deGrom got the offense going with an RBI double which was the first of his two hits on the night. The strong offensive night brought his season average to an incredible .545.

Brandon Nimmo also continued his hot hitting in his return to the lineup. He finished just a triple shy of the cycle and had four RBIs which helped push his average back over .400. The Mets also got an encouraging game from Michael Conforto, who had two hits, getting his average over the Mendoza line. Overall, the team left eight runners on base but went 3-for-10 w/RISP.

The victory puts the Mets back in sole possession of first place with an 8-7 record. Marcus Stroman faces Joe Ross in the second game of the series which is scheduled for a 4:10 p.m. ET start from Citi Field.