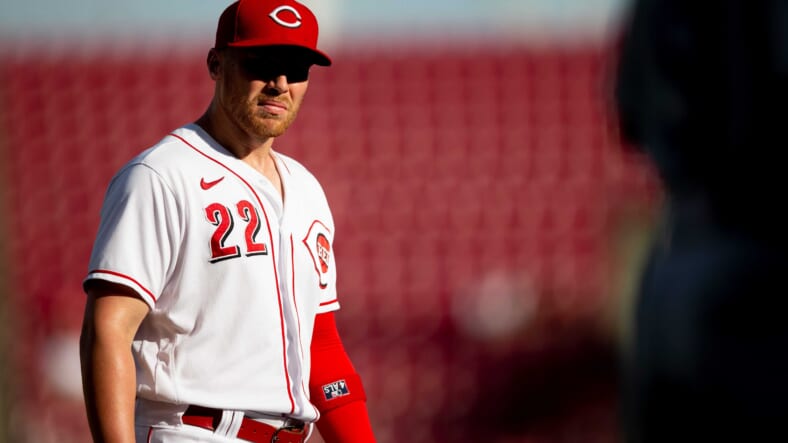 After being DFA’d by the Mets last year, Brandon Drury is enjoying a break-out season with the Reds- could a reunion be in the works?

The New York Mets lead the National League with 45 wins and all of Major League Baseball in runs scored.

Their offensive approach of drawing walks, putting the ball in play, and taking the extra base has led to an average of 5.02 runs per game, behind only the New York Yankees for the league-best mark.

Despite that, the Mets have hit just 64 home runs this season, good for 18th in the league.

One big reason for that would be the lack of production the Mets have received from their designated hitters in 2022.

But could a former Met be the answer at the designated hitter spot for the team?

Brandon Dury spent the first three seasons of his career with the Arizona Diamondbacks before bouncing between the New York Yankees and ultimately finding a home with the Toronto Blue Jays from 2018-2020.

Drury signed a minor league deal with the Mets in the 2021 offseason, often being demoted to AAA Syracuse and recalled at various points throughout the season.

After signing as a non-roster invitee with the Cincinnati Reds this offseason, Drury has taken off.

He signed a non-roster invitee minor league deal with the Reds this year. And now…

Just 57 games into the season, Drury is only two home runs off his single-season career-high of 16, which he accomplished with the Diamondbacks in 2016.

But is Drury’s season too good to be true? The metrics suggest that simply isn’t the case.

Could Brandon Drury be the answer to the Mets DH struggles? The former Met is having a great season with the Reds, and the metrics suggest it's not by accident. pic.twitter.com/weQzWYXbk8

Drury, 29, has spent time at all four infield positions this season, including 37 games at third base. He has also appeared as the DH seven times in 2022.

With the Reds enduring yet another miserable season, the team will surely look to capitalize on Drury’s break-out season and recoup prospects for the veteran.

With defensive versatility and a hot bat, a reunion with Drury may just be what the Mets need to put their lineup over the top.