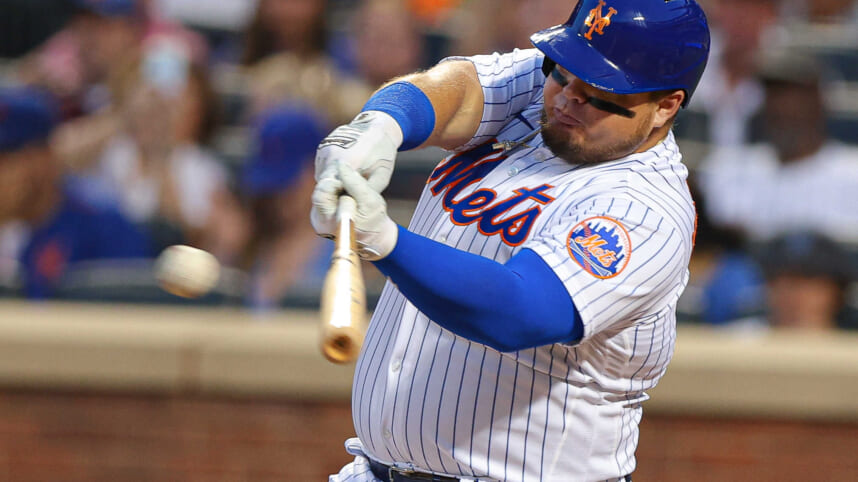 With the New York Mets currently in pursuit of a World Series, the expectation at the trade deadline was that the team would make a splash. One similar to 2015, which guided the Mets on a World Series run.

Instead, the Mets retained all of their top prospects to keep the future in tact and added three solid, veteran bats who have given big hits in timely moments of key games. Between Daniel Vogelbach, Tyler Naquin, and Darin Ruf, the Mets have gotten some pretty nice early returns.

Plenty of production for the New York Mets:

With Vogelbach, on top of his 15 hits in 15 games for the Mets, he has walked 10 times and been hit by a pitch. He has reached base a total of 26 times in 15 games played. Consistently, Vogelbach puts together terrific, long at-bats with his great eye and discipline. Vogelbach has given the Mets two homers, 10 runs batted in, and a whopping 1.041 OPS. He has provided the Mets with the power and big bat presence needed in the lineup after Pete Alonso.

Naquin has reached base 12 times in 10 games with the Mets. He has 11 hits, two of which are triples. Naquin already has seven RBIs for the Mets. He has provided some impressive pop to the order as well with his three home runs, all of which have been at Citi Field. Naquin has an off-the-charts OPS of 1.254 since being added by the Mets.

Ruf has given the Mets batting order five hits and RBIs in just five games with the team (15 plate appearances). He has an OPS of .800 over his first few games as a Met. Ruf has hit the baseball to the opposite field well. Arguably Ruf’s most valuable hit so far with the Mets was with two outs in the bottom of the seventh inning in Tuesday night’s game against the Cincinnati Reds. After intentionally walking Pete Alonso, Ruf came up and drove in two vital runs for the Mets, providing the bullpen with a comfortable four-run lead to finish the game.

One major point of emphasis for the Mets at the deadline was the chemistry in the clubhouse staying together. Vogelbach recently spoke on what it has been like joining the Mets, stating, “It was the easiest clubhouse to come into. The guys were awesome. Everybody was close. There’s no little cliques. This is why they’re good. Everybody’s in it for the same reason.”

It is safe to say while the Mets did not add the big-time, more well-known hitter that, Vogelbach, Naquin, and Ruf have provided the Mets with even more than what could have been expected. Down the stretch, the three will be pivotal to the Mets finishing on top come early November.