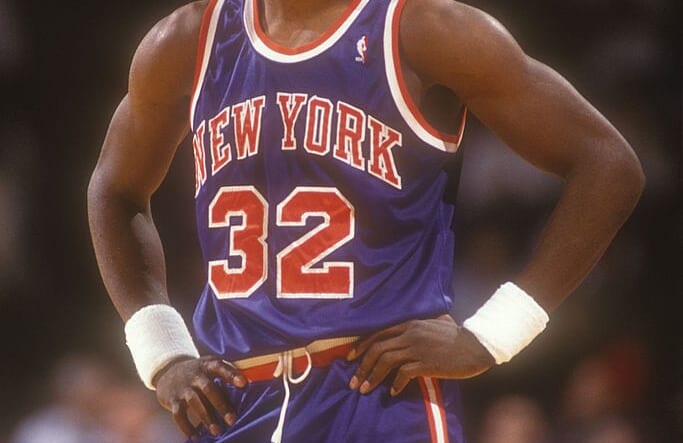 LANDOVER, MD – JANUARY 31: Xavier McDaniel #32 of the New York Knicks looks on during a basketball game against the Washington Bullets at Capital Centre on January 31, 1992 in Landover, Maryland. The Knicks won 125-114. (Photo by Mitchell Layton/Getty Images)

The New York Knicks had one thing going for them in the early part of 90’s basketball, which was toughness along the front lines. Xavier McDaniels, the 6’7 220 lbs bruiser exemplified the very toughness the Pat Riley’s Knicks put forward every night.

On May 2nd, 2020 at 9 pm media company Knicksfantv and The Knick Of Time Show interviewed Xavier McDaniels. The former Knick power-forward escorted die-hard Knick fans down memory land while discussing his lone season with the Knicks and the different star player personalities within the NBA during the tough 90’s era of basketball. The Chicago Bulls versus the New York Knicks playoff series was also a hot topic during the interview.

The fan-favorite during his lone 1991-92 season dropped a couple of gems regarding player contract negations involving Dave Checketts and the front office of the New York Knicks. The X man made it clear that the Knicks had the opportunity to sign him to a longer deal but opted to go in another direction.

McDaniels also mentioned the importance and leadership of former point guard Mark Jackson during the 1991-92 season for the New York Knicks. Xavier McDaniels stated the following on KnicksFanTV:

Mark Jackson was the General that kept everything going for us. I felt like he was the glue. Your talking about a team who won 51 games.

The feeling from McDaniels was if the Knicks kept the 1991-92 core they had together for a few more years while adding pieces, there would’ve been enough talent to knock off the Chicago Bulls.

Overall, the glimpse into McDaniels’s version of memory lane about his lone season with the Knicks is something Knick fans around the world should look into especially during a time like now where there’s no sports activity due to the pandemic.