Why the Knicks should acquire Eric Bledsoe from the Pelicans 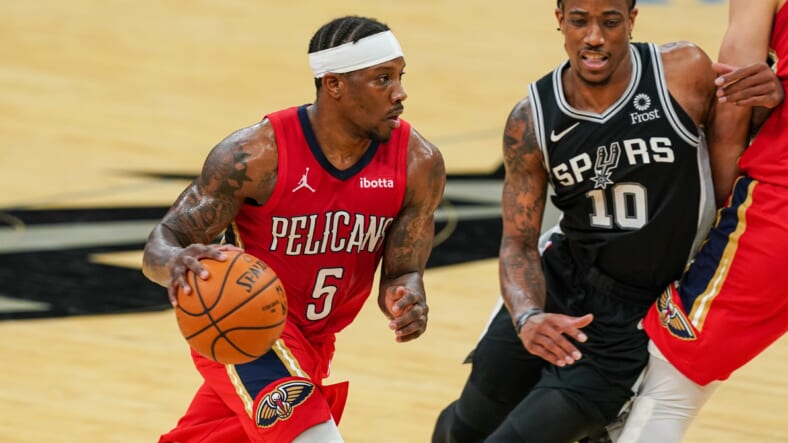 I don’t think Eric Bledsoe necessarily makes the Knicks much better. He’s a score-first guard, averaging only 5.1 assists per game, but there’s a caveat with Bledsoe. According to Ian Begley, the Pelicans are willing to attach a first-round pick to move off of his contract, and they have spoken to the Knicks about this. Anytime there’s a big contract that involves getting picks alongside it, the Knicks should be all over it. They have an arsenal of picks and a good team, and Bledsoe, in spite of his struggles this year, is a solid NBA player. He’s not horrible, and the veteran point guard can make the team better while bringing them a first-round pick as well.

The Knicks aren’t going to be able to just throw cash at everyone in hopes someone comes around, they also are going to need assets to make a trade. Look at all the best teams in the league, which one of them has no stars they spent draft capital on to acquire VIA trade? Anthony Davis, James Harden, Paul George, Chris Paul, the list goes on and on. The Knicks need to be ready with picks to deal for a star if they hope to build a championship team of their own. They have Randle and Barrett, but they’re gonna need more than that to win. Eric Bledsoe’s remaining three years are a small price to pay for a pick when you consider the Knicks’ cap space.

Eric Bledsoe Could Be a Player To Buy Low On

In 2020, Bledsoe’s been subpar, no other way around it, but in his prior two seasons, he was a pretty good point guard. His stats from 2018-2019 are pretty encouraging:

Is he an elite player? No, and that’s why the Pelicans want to sell him with a pick during his rough season. Can he be an improvement over a guy like Elfrid Payton? Yea, he’s not a great shooter, but Payton shoots 25% from 3, so I’ll take the higher percentage on nearly 3 more attempts at point guard (with a similar amount of assists) over Payton. He’s a really solid guard, and he provides better spacing and plays at the position than we have right now.

Biggest Roadblock in the Deal

If you were to acquire Bledsoe, what do you do with Payton? As many people pointed out in my Lonzo Ball article, who’s actually going to take Payton? He has to greenlight any trade, and you have to figure out where you’d play Bledsoe. RJ Barrett, Immanuel Quickley, and Derrick Rose (when he returns) should keep every minute they have now, so you have to figure out what to do with Elfrid Payton. The Knicks would have to either deal him in this trade and hope Payton greenlights a deal to his former club or try to release him. It’s a tough situation, and it’s what will be a looming question that I’ll admit I can’t answer well.

If the Knicks can figure out the Elfrid Payton ordeal and these talks for Eric Bledsoe continue, I think it’s fair to say the Knicks should 100% pounce on this opportunity and improve as a team for now and for the future.