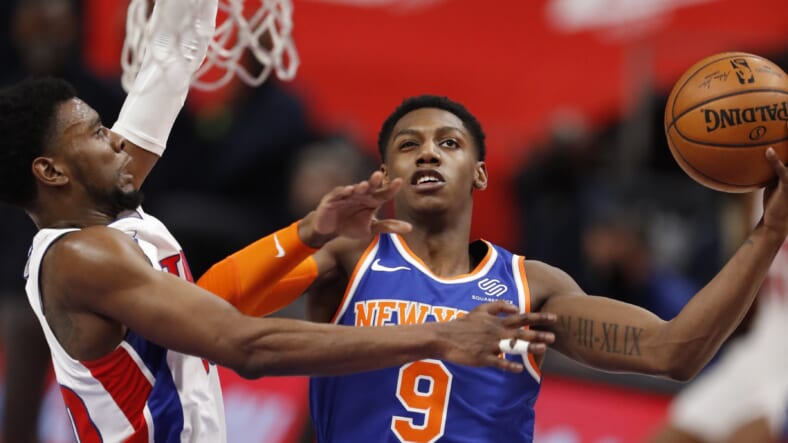 One of the most exciting developments during the 2020â€“21 season was the growth of Knicks guard RJ Barrett. Barrett, who was in his second season in the NBA, saw increased statistics in multiple categories, including points, assists, rebounds, and field goal percentage.

Playing in 72 games and 34.9 minutes per, he averaged 17.6 points, 3.0 assists, 5.8 rebounds, and shot 44% from the field. He also connected on 40% of his three-point attempts, shooting 4.3 per game. Enjoying an 8% increase in three-point efficiency and a 13% increase in free-throw success rate, Barrettâ€™s shooting enjoyed astronomical developments.

“I changed my shot, so I needed a little time to get used to it. Really just coming back at night and getting reps. Coach is always in here until 9 or 10 PM every day,” Barrett said via Sirius XM Radio. “So just coming in and shooting. Seeing coach, talking to coach at night. He’s always had my back, kept my confidence up.”

Before every home game last season, Barrett spent the night before working on his shot, putting up reps, and building his fundamentals. Having Thibs in the office until late benefited him, keeping his confidence high and presenting a unique opportunity to grow behind the scenes with extra effort.

This upcoming season, the Knicks have a ton of new weapons to utilize, including Evan Fournier and Kemba Walker. Their main utilities will apply directly to the offense, as Fournier is capable of creating his own shots, something Reggie Bullock struggled with last season, and Walker is a massive upgrade over Elfred Payton.

The idea is that with more offensive weapons, opposing defenses wonâ€™t be able to single out a specific player like the Atlanta Hawks did to Julius Randle in the playoffs.

â€œI actually saw something on Twitter: RJ Barrett going into the lane this year,â€™â€™ Barrett said. â€œAnd thereâ€™s somebody else by themselves, wide open. Thatâ€™s how itâ€™s going to be this year. Thereâ€™ll be attention on other people. All of us can make a play. Iâ€™m looking forward to that opportunity.â€™â€™

RJ hit it right on the head, as his teammates will be open more frequently, with attention being spread out among the starting five.

The Knicks should be loving the growth of RJ as a special offensive player:

The third-year player remains an aggressive offensive playmaker, with 64.7% of his field goals made last season were unassisted. Interestingly, from three-point range, he was able to find more efficient shooting spots rather than trying to create long-range opportunities for himself. He spaced the floor well, attacking the corner as his most lethal shooting spot. His overall points coming from three-point range rose from 23.5% in his rookie season to 29.4% last year, and I expect that number to continue rising as he develops as a shooter.

Barrett was also more efficient with the ball in his hands, turning it over on just 20.1% of his possessions compared to 24.6% in his rookie season (Turnover rate (TOV%) is calculated by multiplying 100 times the total number of turnovers, which is then divided by the teamâ€™s field goal attempts).

Ultimately, in all of the most important categories for a scorer, Barrett saw improvements, representing his potential. At 21-years-old, this could be his year to break out and prove he can be a No. 2 if not No. 1 one player alongside Julius Randle.

In the Knicks’ first pre-season game, Barrett went 7-14 from the field and 3-6 from 3-PT range, scoring 17 points. He didn’t turn the ball over once in 25 minutes of play.