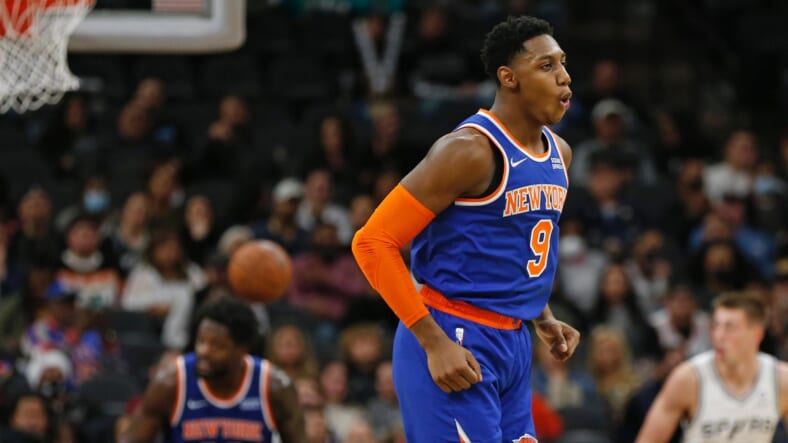 The Knicks are coming off an electrifying win over the Boston Celtics on Thursday night, thanks to an answered prayer tossed up by RJ Barrett. The 3rd-year guard was quiet throughout the game, but he showed up in the biggest moment with 1.5 seconds left on the clock.

Tom Thibodeau’s team fought back from a 25-point deficit in the 2nd half, with PF Julius Randle giving the fans a thumbs down in the process, sparking outrage after the game. Randle instantly made headlines when he mic-dropped a “shut the f*ck up” during the post-game presser.

However, the Knicks will take on Boston once again on Saturday night, relying on Randle to help and will his team to another needed victory as the Knicks target the .500 mark on the season.

The Knicks are currently 19-20, winning their last three games, despite significant struggles at times and major deficits to overcome. On Saturday, they have an opportunity to break even on the season, which constitutes a revival after dropping as far as four games below .500 just a few days ago, but luckily a weaker string of opponents opened the door for a return to form.

Boston is coming off arguably their worst defeat of the season, thanks to Evan Fournier’s 41 points and Barrett’s heave from the heavens. Nonetheless, they’re more than capable of providing elite scoring with Jayson Tatum and Jaylon Brown at the helm — the team’s cohesion seems to be a problem at times, especially with a lack of rebounding and physical interior players.

Randle collected 16 defensive rebounds in the win on Thursday, displaying proficiency and energy on the floor, something the Knicks desperately needed. His outburst after the game was a direct reflection of negativity and criticism, indicating he wasn’t going full speed, but the All-Star forward apologized for his actions on Friday afternoon.

“Just want to send a quick message to our fans and be clear — I love NYC and being a part of this team and this franchise,” Randle wrote. “And like most Knicks fans, I am really passionate about us being successful.

“My family and I love how the fans and New Yorkers have embraced and accepted us and have made us feel great about our decision to commit long-term with the team this past summer. This support means the world to us.

“I understand that my actions also represent the league, this organization, and the city, and that I should have handled things last night differently and expressed myself with more professionalism and more appropriate language in the heat of the moment. My comment was an example of how sometimes you say things you regret to people you love, even if it came from a place of passion and deep love.

“Nobody wants to win more than me and I will continue to show loyalty and dedication to my teammates, the entire Knicks organization, and the fans who have shown me and my family so much love. I am going to keep focusing on the future.”

If Randle truly wants to win against Boston, which I believe he does, the Knicks need to display better defense and knock down open looks. Fighting back from massive deficits is a losing strategy and will not be sustainable against better teams.

Pulling even on the season may give the team a sense of a fresh start, though, which could spark confidence moving forward.