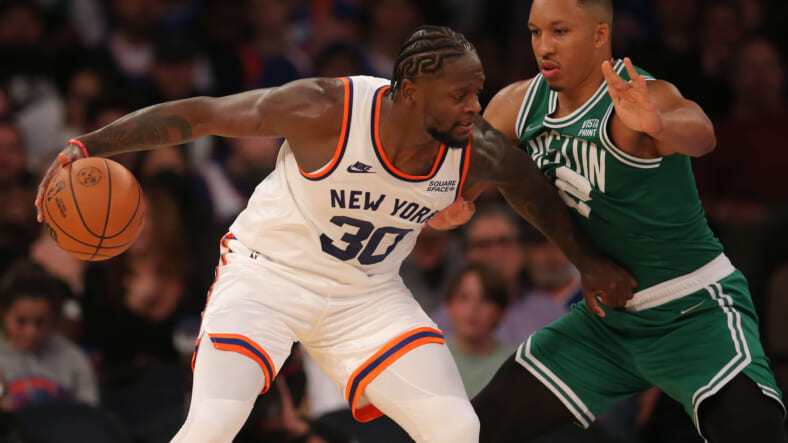 The New York Knicks emerged victorious in an exciting season opener against the Boston Celtics (final score 138-134). After starting the first half with lackadaisical defense and poor communication, the Knicks bounced back strong in the second half, limiting Boston to 48 points while scoring 62 of their own.

Bostonâ€™s Jaylen Brown scored 46 points after spending the last ten days rehabilitating from Covid and progressing through protocols. His performance left a stain on the victory, but the Knicks managed to limit the production of Jayson Tatum, who shot 7-for-30 and connected on just 2-of-15 three-point attempts. He scored 20 points with 11 rebounds. Brown, on the other hand, shot over 50% from the field and 60% from three-point range, producing a large chunk of the Celtics’ points.

However, the Knicks had a few stand-out performances of their own; one of them coming from a newcomer to the New York area.

Two standout players for the Knicks in opening win:

Randle picked up right where he left off in the 2020-21 season, posting 35 points over 46 minutes, shooting 12-of-27 from the field and 3-of-8 from range. He also contributed eight rebounds, nine assists, three blocks, and turned the ball over a game-high seven times.

Despite losing the ball on a few occasions, he was a monster in the paint and came up big when the Knicks needed him most. His contributions set the stage for another elite season accompanied by an All-Star appearance.

After the game, head coach Tom Thibodeau stated how surprised he was that Randle was more hungry for success than last season. Sometimes, players take a step back after signing big contracts, but you can tell that Randle is motivated by much more than money.

“He gives you everything he hasâ€¦He had that monster year last year, got a new contractâ€¦And he’s hungrier now than he was last year, which I thought was impossible,” Thibodeau told reporters.

While some may point to Mitchell Robinson’s 17 rebounds and 11 points as one of the primary performances for the Knicks (which it was), we canâ€™t go without mentioning Evan Fournier and his incredible shooting prowess in the victory.

The new free-agent signing contributed 32 points, four steals, three-assist, six rebounds, and shot 13-of-25 on the field and 6-of-13 from three-point range. Fournierâ€˜s ability to create opportunities on his own and drive to the rim separates him significantly from Reggie Bullock, who the Knicks allowed to leave this past off-season, subsequently signing with the Dallas Mavericks. The French-born player was on fire during overtime play, which kept the Knicks alive — a 3-PT shot with 55 seconds left in double-OT was the catalyst to give New York the edge. That specific basket provided a three-point lead, just enough cushion to force Boston into taking low-percentage shots the rest of the way.

If Fournier can continue to perform like this, the Knicks will have themselves one of the more prominent and dominant offenses in the NBA. Fournier played 44 minutes, just behind Randle and RJ Barrett, who played a team-high 47.

Despite scoring zero points in the first half, Barrett contributed 19 in the second half, picking up two blocks. The team contributed 10 blocks in total and nine steals. If the Knicks can get off to more aggressive defensive starts, their offense should lead them to plenty of victories. They shot 37.8% from three-point range on the evening and 48.6% from the field. However, one number that needs to increase is their free-throw percentage, as they connected on just 70.4%.

Overall, it was an exciting and majestic way to start the regular season — it’s going to be a fun one, Knicks fans!