Turnovers continue to be one of the Knicks’ biggest flaws 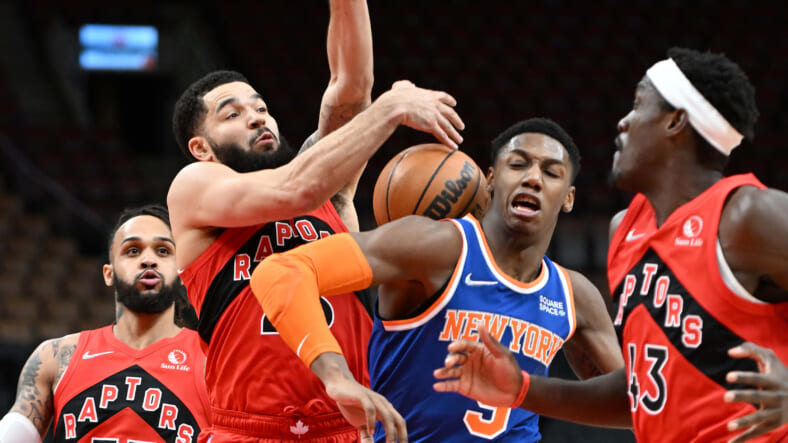 The New York Knicks have struggled with maintaining possession as of late, which is a large factor to their 1-4 slide since their 3-1 start to the new season. In their Saturday night loss to the Boston Celtics, the Knicks had an AST/TO ratio of 1.69, compared to Boston’s 2.50.

The Knicks have the 11th-worst AST/TO ratio in the NBA this season and the 4th-worst over their last three games.

The Knicks’ stars are the biggest culprits

The bulk of the Knicks’ miscues when it comes to playmaking have come from two of their best players, Julius Randle and RJ Barrett. Barrett had actually started to look much better controlling the ball prior to last week, having just two turnovers combined in the games against the Bucks and Cavaliers.

However, he has now taken a step backward with handling the ball, as he has committed at least two turnovers in his last three games, including a season-high six turnovers against the Boston Celtics in his previous game on Saturday, bringing his total turnover tally to 10 in that span.

The 22-year-old has appeared to try to force the ball down the lanes to the paint, driving in traffic in hopes of either drawing fouls or drawing double teams to find open shooters outside.

While being that aggressive can work sometimes, smart defensive teams like the Celtics will pick up on this and get a hand on the ball if it is not protected well on those drives to the basket, which appeared to be the case on Saturday.

Knicks fans see the potential Barrett has a playmaker and want to see him clean up the turnovers to allow him to reach his full potential as a combo wing.

Randle, on the other hand, has consistently struggled mightily with not turning the ball over of late, as he has committed 20 turnovers in the last five games combined, an average of a staggering 4.0 TPG in that span. This rough patch has caused his AST/TO ratio for the season to drop to 1.14, his worst mark since the 2019-20 season.

Randle has appeared to have moments of over-dribbling and having poor ball protection, which allows defenders to easily get a hand on the ball and force a turnover.

Now obviously, Randle and Barrett see the ball the most on the Knicks, as they are the two stars of the team, so naturally, turnovers will mount, as they also see more double teams and face increased pressure compared to the rest of the team.

However, turnover rates as high as theirs are not going to win basketball games. The Knicks have allowed the 6th highest opponent fastbreak points per game in the NBA this season at 16.3, a clear sign that the Knicks are allowing too many transition opportunities as a result of the increased turnovers.

The Knicks will look to fix their turnover problem and start a winning streak when they face the Minnesota Timberwolves on Monday.