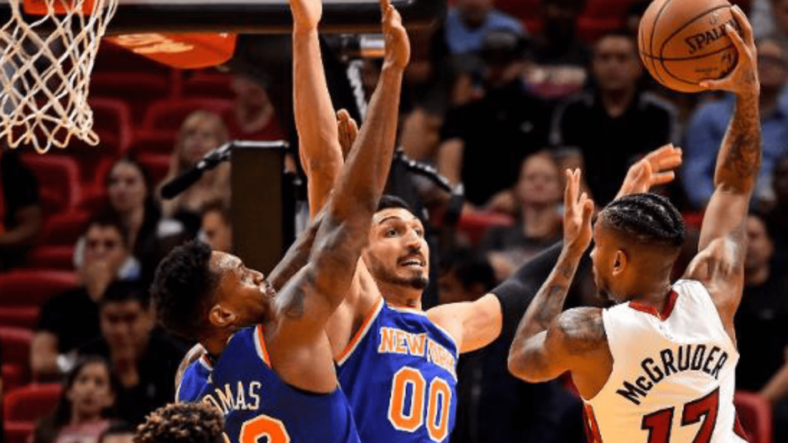 The New York Knicks have been in every game this season. Â Theyâ€™ve had to fight their way back into games and once they have, theyâ€™ve kept it close and competitive. Â Last night in Miami, that was not the case. Â The Knicks tossed up their first stinker of the season and got their doors blown off by the Miami Heat, 110-87.

Before the beginning of the game, Knicks Twitter were optimistic that the team would get a win on the road. Â The Knicks usually come to play against the Heat, as some may still consider this a rivalry from the 90s, but they simply did not show up for a rivalry game last night.

Coach Fizdale said before the game that the Knicks, â€œhave to get off to a good startâ€, as they like to come out flat, which we all know. Â The Knicks did get off to a hot start in the first. Â The three ball was dropping for the Knicks as they jumped out to a early 11-point lead, thanks to the second unit, at the end of the 1st quarter and then the wheels fell off.

From the beginning of the 2nd quarter and until the end of the game, the Knicks seemed to forget everything Fiz has taught them. Â There was no energy, fire or Â competitiveness that Fiz as preached. Â The interior D, and D overall, was lacking as Whiteside, McGruder and any other Heat player were able to get to the bucket with ease. Â The Heat also shot the lights out, especially in the 3rd quarter, as they dropped 45 points on our Knicks. Â This should go as no surprise as every single team has shot the lights out against the Knicks this season.

There were few bright spots for the Knicks last night. Â The main one was Damyean Dotson. Â Dotson logged the most minutes for any Knick with 34 and also was the teams leading scorer and rebounder with 20-10. Â Before the game, Fiz thought about possible changes to the starting lineup and Dot is making a case strong. Â He was great on both sides of the court and is showing what he will bring to the team when offered consistent minutes.

Next was the Knicks three point shooting. Â For the time being, three pointers were the only thing that kept the Knicks in the game, as they were 9-15 from beyond the arc. Â Like who are these guys? Â But, that was short lived as nothing fell after the 1st quarter. Â Super Mario Hezonja had another decent showing with 13 points and showed confidence in his shot as he chucked up 15 attempts. Â Timmy had an off night 4-10 from the floor with 14 points and Kanter couldnâ€™t do much of anything as Whiteside had his number all game.

Again, Fiz tossed around the idea of a new starting lineup and many players are making their case to be plugged into the first unit. Â Dotson, Hezonja and Vonleh make reasonable cases to start over players like Lance Thomas and Trey Burke. Â Since the Knicks have trouble starting the games out hot and struggle with interior D a switch is necessary. Â A staring lineup that can help in both areas could be Frank, Timmy, Dot, Vonleh and Kanter. Â Or you can have Super Mario over Vonleh, either or. Â We hope to see a new starting lineup Friday as the Knicks take on the defending Champion Warriors at the Garden at 7:30.