The Two Weekend Losses Still Brings Hope for the Knicks 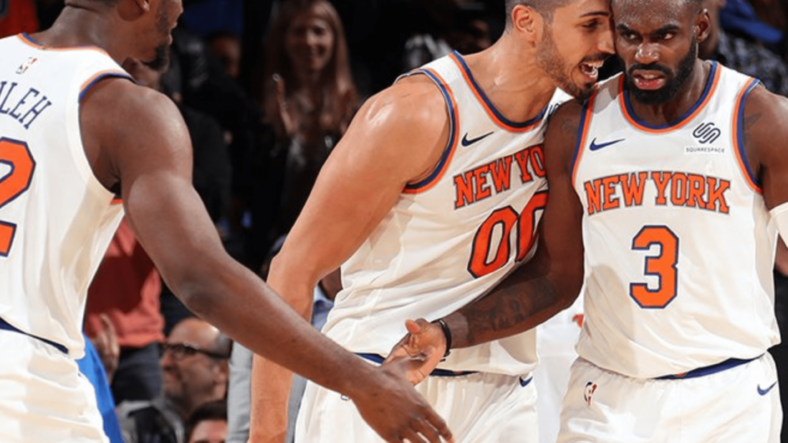 Welp, it was a rough weekend for our New York Knicks. Â After a fantastic opening night last Wednesday, the Knicks lost back-to-back games by a combined 4 points. Even though they lost, both of the games were close and had playoff feel to them. Â When was the last time we were this excited for the first couple games of the season? Â Probably 5 seasons or more? Â However, the Knicks lost to the Brooklyn Nets on Friday, 107-105, then to the Boston Celtics, 103-101, Saturday night.

The one thing that the Knicks couldnâ€™t do was come out flat Friday night in Brooklyn and thatâ€™s exactly what they did. Â It was basically another home game for the Knicks, with all their fans in attendance, but that didn’t matter, the Nets shooting stole the show. Â The Nets couldnâ€™t miss, literally. Â They shot 49% from the field, but it felt like 90%. Â The Knicks were also out-rebounded 60 to 41.

The Knicks played down for basically the entire game, having to scratch and claw their way back until the second half were it became a tug-of-war. Â The Knicks interior defense was non-existent and the Nets took advantage. Â Easy buckets in the paint leading to outscoring the Knicks 48-40.

The Nets were lead by Caris LeVertâ€™s 28 points and big go-ahead easy bucket with Tim Hardaway Jr. defending him. Â Then, the Knicks came out ofthe timeout with an terrible play calling with Hardaway chucking a bomb and praying, but the pray wasnâ€™t answered. Â Despite Kanterâ€™s 29 points and taking over with game in the second half, the Knicks feel short in the Battle of the Boroughs. Â But, Kevin Knox also found his shot which made all Knicks fans all happy inside. Â KnoxÂ was feeling it from the floor, calling for the ball and making some clutch shots.

Following a disappointing loss to the Nets, the Knicks returned to the Garden to host the Celtics. Â The Knicks came out flat again and it also didnâ€™t help that no shots were falling for them. Â It almost felt like we were watching the Brooklyn game all over again. Â The Celtics jumped out to a quick 13-point lead in the first quarter until the Knicks ramped it up in the second quarter. Â Thatâ€™s was when the Fizdale fight, grit and spirit took over.

Allonzo Trier was the man that provider that offensive spark in the second quarter bringing the Knicks back into the game. Â From that point on, it was another tug-of-war. Â The teams would match buckets until the 4th quarter where both teams would go on a runs. Â First the Celtics then the Knicks went on a run, fighting their way back. Â Despite begin the youngest team in the NBA, the Knicks have a lot of fight in them, which is a excellent sign for the future of this team.

Jayson Tatum ultimately took over the game with monster buckets down the stretch for the Celtics. Â However, all of his big buckets will over-shadow his poor decision making when contesting Trey Burke on a deep 3-pointer, leading to a shooing foul which gave Burke 3 free-throws to tie the game. Â Burke ended up missing the first free-three taking all the air out of the Garden. Â The worst part about that loss was Knox going down with a ankle injury. Â Knox looks to be out 2-4 weeks. Â Not a good sign after Knox started to become comfortable.

In both losses, the Knicks showed that they are a team that shouldnâ€™t be taken lightly. Â This is exactly what fans envisioned when Fizdale took over. Â Granted, weâ€™re only 3 games into the season, but the Knicks have shown their young ability to fight and stay in games. Â This is a great sign for the future.

It is also very impressive that they have been able to put up points, averaging 111.3 points a game as a team. Â We thought they would be hurting for points, but that hasnâ€™t been the case thus far. Â The Knicks look to be on the right track, all we can hope for is that the Knicks keep up the competitiveness until our unicorn returns. Â The Knicks have another tough test tonight as they travel to Milwaukee to take on the Greek Freak.