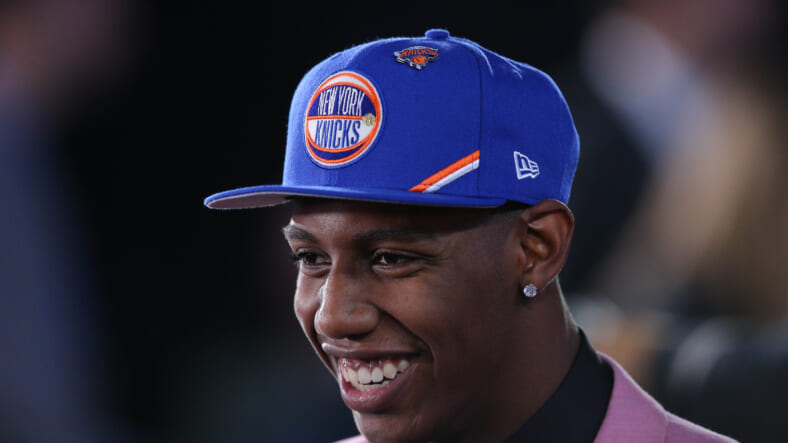 Jun 20, 2019; Brooklyn, NY, USA; RJ Barrett (Duke) speaks to the media after being selected as the number three overall pick to the New York Knicks in the first round first round of the 2019 NBA Draft at Barclays Center. Mandatory Credit: Brad Penner-USA TODAY Sports

Rumors about the New York Knicks trading for a superstar is back.Â  SNYS Ian Begley reports that one member in the front believes, â€œItâ€™s the best path for us.â€

This is not the first time, or last, that these rumors will circulate.Â  It seems like every single season theyâ€™re reports of the Knicks trading for a superstar.Â  However, it never happens.

The Knicks have traded, and tried, to trade for superstars in the past.Â  The most recent was when the team traded for Carmelo Anthony.Â  Anthony gave the Knicks plenty of great years and memories.Â  But it didnâ€™t get them a championship.Â  He did his best though.

While one member in the Knicks front office believes â€œitâ€™s the best pathâ€ to go, it may not be the right one.

The, real, best path for the Knicks to take is continue to build through the draft.Â  The old way of trying and hoping for a superstar to come to New York and to turn the organization around is over.

Not many players, well established players, want to play for the Knicks.Â  They want to win and win now.Â  The Knicks arenâ€™t winning. Unfortunately, what Kevin Durant said might be true, â€œThe Knicks arenâ€™t cool.â€Â  Players want to go to a organization that is cool and have a less dysfunctional front office.

Therefore, the best way to go forward is building through the draft, which theyâ€™ve done a nice job the past few years.Â  The Knicks have two great building blocks in place with RJ Barrett and Mitchell Robinson.Â  Hopefully other young players like Kevin Knox, Frank Ntilikina can take bigger steps to be in the teams future.

Also, the Knicks have solid prospects in the G-league waiting for their chance, Ignas Brazdeikia, Kenny Wooten and Lamar Peters.

The Knicks should have a top 5 pick in the draft which should be another great building block.Â  Stay the course building through the draft.Â  Thatâ€™s the best path for the New York Knicks right now.