The New York Knicks could move Smith Jr. to these 3 teams 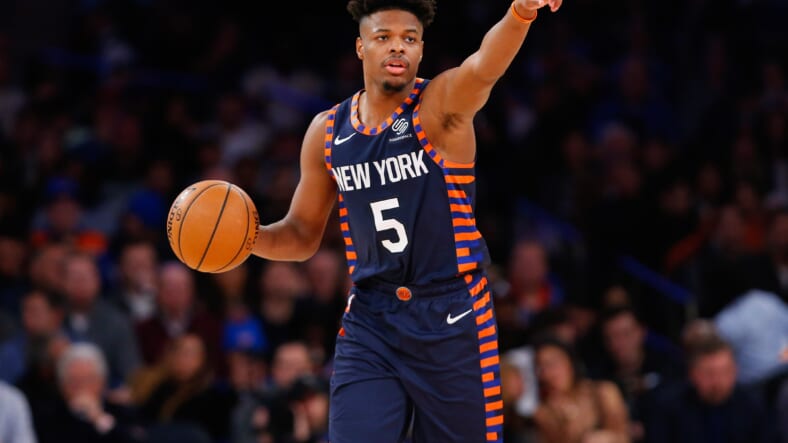 The New York Knicks need to figure out what to do with Dennis Smith Jr.Â  There are rumors circulating of teams that have interest in acquiring the N.C. State product.Â  Here are 3 teams that can be possible suitors.

Recently, New York Postâ€™s Marc Berman suggests that trading Smith this off-season is a definite itâ€™s possibility.Â  The Magic could be a team to trade for the 22-year old. Smith has had a rough go with it for the Knicks.Â  He had injuries which resulted in reduced playing time and a decline in his overall game.Â  Not to mention a devastating loss in his family.Â  His confidence has never been the same since coming to New York in the Kristaps Porzingis trade.

Smith worked on developing a better looking shot this off-season but things havenâ€™t panned out. The Knicks have seen some pop to his game for time-to-time but itâ€™s never been consistent. He also seemed checked out and disinterested after the All-Star break. The Magic could do wonders for Smith, look at how they turned around Markelle Fultzâ€™s career.

Before the clock struck on the trade deadline, the Knicks explored a trade with the Hornets.Â  The trade couldâ€™ve been Smith, Julius Randle and a first-round pick for Malik Monk and Terry Rozier.Â  It sounds good except for the first-round pick. Trading away first-rounds luck are a thing of the past.Â  That should be off the table entirely.Â  Â Thankfully, the Knicks have made it clear that they have no intentions to trade any picks.Â  Hopefully, the Knicks and Hornets can revisit this trade scenario in the off-season.Â  Smith needs a change of scenery and a smaller market team, like Charlotte, could do him a world of good.

New team president Leon Rose may have intentions in trading for his current client, Chris Paul.Â  However, Paul still has a big, 2-years left on his contract.Â  He earns 41 million next season and 44 million in 2021-2022.Â  Thatâ€™s a big cap hit for the Thunder. B ut Paul has done wonders for this Thunder team.Â  Before the suspension of the season due to COVID-19, he has the Thunder sitting in the 5th seed in the West.Â  Despite their success, the Thunder could be looking to dump that contract and, if the Knicks are interested, Smith could be involved in such trade.Â  The Thunder will command a young player in return if the Knicks are looking to take on Paulâ€™s insane contract.

Smith could be a possible trade piece if the Knicks are looking to trade for the veteran point guard.Â  Heâ€™d have to be involved in some way if the New York Knicks truly want Paul to be one of the focal points to tutoring the youth during this rebuild.