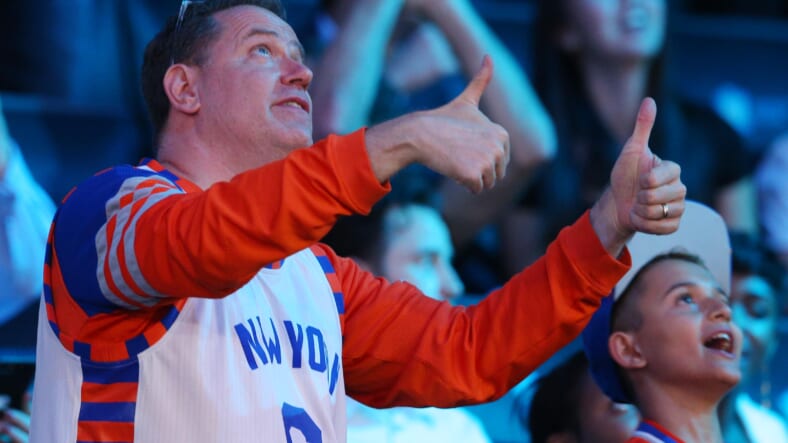 The New York Knicks went from having a decent start to the week to a disaster.Â  As if the Spike Lee fiasco wasn’t enough, there’s more reports of fans being harassed.

A fan in attendance to last nights pounding by the Utah Jazz began a â€˜Sell the teamâ€™ chant.Â  That fan was interrogated and threatened with possible arrest over the chant, reports Stefan Bondy.Â  This isnâ€™t the first time this has happen to Knicks fans.

A video surfaced last season of a fan recording the Knicks owners walking into the tunnel saying just that.Â  The owner asked one of his officials do something with that fan, most likely was escorted out of the building.

There must to be several other incidents similar to these.Â  This is very on brand for the Knicks in regards to how their supporters have been treated.Â  First was Charles Oakley, more fan interrogations, Spike Lee, more fans situations.

Itâ€™s ridiculous already.Â  The NBA and Adam Silver need to realize that this bad for business.Â  Not just for the New York Knicks but entire association.Â  The league’s most valuable franchise harassing fans is not a good look.

Fans come to the Garden, or any other game in that matter, to have a good time.Â  While some fans take that â€˜funâ€™ to a different level, chanting â€˜Sell the teamâ€™ is petty.Â  And if others don’t believe that it’s a trigger for the owner then something’s wrong.

Fans need to realize that this has to be one of the main factors to why big name free agents donâ€™t choose the Knicks.Â  The way they’re run is the issue and it starts from the very top.

Yes, itâ€™s the owners team and he has the right to run his team however he wants.Â  But there has to be a line.Â  Harassing loyal supporters and fans is bad business.Â  The NBA should step in on how the New York Knicks are run because it’s indeed toxic.Â  Best of luck Leon Rose.